by Joe Bull
in News

Thanks to the internet, rumours seem to circulate quicker than an ice cube at a pool party in this UK heat.  And there are none more-so popular than those involving Disney…Marvel…and Star Wars.  Oh, and not forgetting a certain director going by the name Kevin Smith.

The latest of which began with Fandom Wire reporting Kevin Smith had met with Disney for a future potential project. Despite no solid facts, FW said that “It’s very possible that Smith will be taking on a Marvel or Star Wars project,” but did caution, “That’s all speculation at this point.”

Recently, Smith (via Twitter) has publicly denied his involvement with either franchise… 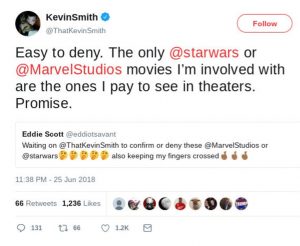 …in response to a fan’s question.

So, was there any merit to this speculation?  Well, yes, some actually… Smith has had experience directing episodes of CW shows The Flash and Supergirl but with most of his movie directing leaning towards R-rated comedies such as the horror comedy Tusk (2014), it might be a far-stretch imagining Disney letting him loose with either franchise.

As the original rumour didn’t claim the movie was either Marvel or Star Wars related, his denial doesn’t rule out the fact that he might be involved with a secret Disney film.  Maybe they could be investing in his final movie in the True North trilogy, Moose Jaws, described as “Jaws with a moose”…  Or then again, maybe not.

It’s hard to see Smith’s history relating to anything Disney would find appealing, so perhaps this rumour has just come from some bad information.  Still, we’ll be eagerly awaiting more information from official sources.

With all of the negativity towards Star Wars: The Last Jedi and blatant boycotting of Solo: A Star Wars Story, the Star Wars universe is heading into shaky territory – perhaps a total shake-up of directors could re-establish the fans’ love and respect back.  Check out our previous thoughts on this here.

What kind of Star Wars movie would Smith have made?  Leave your comments, as always, down below.