Even before its European premiere, London Film Festival’s opening film Suffragette had generated a lot of buzz.   A historical drama about the suffrage movement in early 20th century London, a group of working women played by Carey Mulligan, Anne-Marie Duff and Helena Bonham Carter tirelessly fight for their rights in a male-dominated society.

On a drizzly morning, director Sarah Gavron, screenwriter Abi Morgan, and actresses Carey Mulligan and Meryl Streep enthusiastically talked about the film during the Suffragette press conference, not to mention their views of feminism in society, working together in a predominately female cast and equality in the film industry: 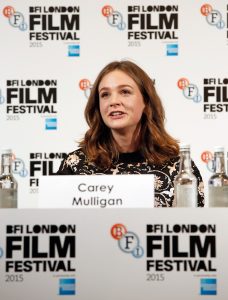 Mulligan:  What I love about this film is that it didn’t feel like a documentary about a time; it felt like a film about today.   It’s a film to mark the achievement of what we did and what they [suffragettes] gave to us, but also highlight where we are in the world.  For me, it was a great moment to realise and really understand what women went through to get the right to vote, but also take another look at where we are today.

Obviously, in this country, largely we are very privileged but the fact that the film does talk about the rest of the world and where we are, just in terms of their votes and not of their living, wages and the way they’re treated, the marriage laws – we always felt that bringing the film’s background to today, trying to make it about where we are in society now, was the most important thing about the film.  To give people an idea of the history, and to help understand, but also to open our rights – it’s really done that for me.

The chemistry of the cast: 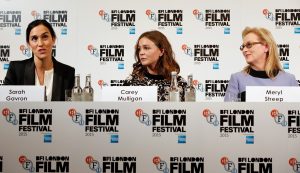 Sarah Gavron: None of the cast had worked together before, but then we got together to rehearse and we had three weeks of going through the script and really discussing it and Carey had months and months of preparation.  They all immediately formed this bond – I had nothing to do with it.  They became great friends but one of the problems was stopping them laughing and getting back to work!

There was this unusual sense of camaraderie and I wondered it was because we were telling this story that everyone felt passionately about but also there is this unusual balance; we had men and lot of women in key positions and that was exciting.  It was also exciting to have lots of women on-screen together and that was incredibly exhilarating for all of us. 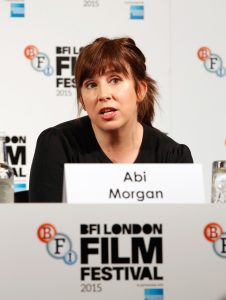 Abi Morgan: What was interesting in terms of collaboration when you work with actors so early on is that it is quite rare to get that length of rehearsal period in film and to make it bespoke as you can for those actors, but also you start to listen to them.  I think great work happens is when you truly start to collaborate with the intelligence of brilliant actors.

On equality in film:

Gavron: It is baffling when the statistics year-in, year-out are so bleak.  I am excited at this year’s London Film Festival, there are 46 feature films directed by women and there is an appetite for more female-centric films or films made by women, so I’m optimistic. People are talking about it, it feels like – for the first time – I’m walking into a room and people are receptive, so hopefully the times are a-turning. 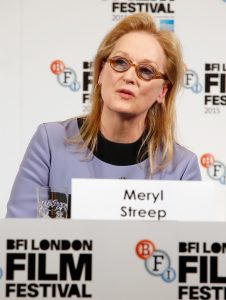 Meryl Streep: In this business, part of it is driven by buzz.  So I was always thinking, ‘what makes buzz?  what controls that?’  In the US, when people go to find a film to watch, they go onto Rotten Tomatoes, so I went deep, deep, deep into Rotten Tomatoes and I counted how many female contributors to Rotten Tomatoes; people who critics, bloggers, writers – and there was a very strict set of criteria that allow you to be a blogger on the site.  Of those people who are allowed to rate on the Tomatometer, there are 168 women and I thought ‘that’s absolutely fantastic.’ And if there are 168 men, it would be balanced.  If there were 268 men, it would be unbalanced but I would be used to it.  Actually, there 760 men who rate on the Tomatometer.

Now, I submit to you; men and women are not the same – they like different things.  Sometimes they like the same things but sometimes their tastes diverge.  If the Tomatometer is slighted so completely to one set of tastes, that drives box offices in the United States.  So who are these critics or bloggers?  I went on the site of the New York Film Critics, who are 37 men and 2 women, and then I started to go on all the sites and all the critics, and – the word is not disheartening, it’s infuriating, because people accept this as received wisdom, this is just the way it is.  And you can take every single issue of feminine rights in the world and examine under the same rubric because it isn’t fair.

We need inclusion; this year, it has to be equal.  Half and half.

Suffragette will be shown at the BFI London Film Festival on Thursday 8 October and out in UK cinemas on Monday 12 October.