Last week, Disney went and did something completely bonkers. The Twittersphere exploded in a blast of vented frustration, as more and more people caught wind of what the animation company had done. I soon found myself signing a petition demanding the dignity of a person made of pixels. A few days later, however, it seemed that the crisis may have been resolved.

What sparked this five-day fire-storm? Well, on Saturday 11 May, Disney inducted a new female character into their Disney Princess range. The Chosen One was Merida, the feisty, tomboy protagonist of Pixar/Disney movie Brave. Hailed as Disney’s first strong and independent female character, she has been celebrated as the perfect role model for young girls worldwide. There have been some feisty, female Disney characters in the past, but all have remained suppressed in some way: Mulan fought as a soldier, but had to hide the fact she was a girl to avoid severe punishment; Jasmine had a pet tiger, but spent an awful lot of time powerless and swooning around in the sky on a front-door mat; Esmeralda could shake her booty and kick ass all at once, but was nearly burned at the stake for witchcraft… Merida’s arrival was immensely exciting, because she was the first Disney girl to get a shot at fully defying the patriarchy. Characterised by her fiery hair and pithy back-chat, the Scottish princess could ride a galloping horse with ease, shoot arrows better than any boy and full-out refused to marry according to her parents’ wishes. Finally: a Disney film about a girl who thought outside the lover-boy box. 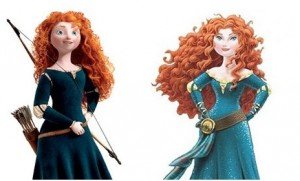 In preparation for last week’s occasion, Merida was given a makeover. The word officially used by Disney was “glam”. Yes, they glamorized a cartoon person so that she would look just right for the almighty honour of joining the ranks of pretend princesses. Images of “glam” Merida were posted on the official Disney website. Observe Exhibits A and B, above. Exhibit A shows a radiant, Celtic princess with messy red hair, wearing a simple dress and holding her trademark bow and arrow. She’s basically Anne of Green Gables, with a load of added sass. Exhibit B, on the other hand, has deathly pale skin, bigger breasts, a waist that looks like it’s been corseted beyond all repair, and an eye-shape the likes of which I have never seen on a real human being. There’s a bit more skin on show and those curls have been tamed into spiralling, orange serpents. She reminds me of the Gorgon Medusa. Disney’s taken her bow away – but I suppose she won’t be needing it if those crazy eyes can turn people into stone.

Inevitably, people went ballistic.  Brenda Chapman, Merida’s creator and co-director of Brave, accused Disney of ”a blatantly sexist marketing move based on money”, stating that “Merida was created to break that mould — to give young girls a better, stronger role model, a more attainable role model, something of substance, not just a pretty face that waits around for romance.” One cartoonist blogger posted this absolute gem. An interesting comment piece in the Christian Science Monitor told of how a seven year-old girl shouted “Yuck!” at first glimpse of the Glam Gorgon. Writer of the piece Lisa Suhay pointed out the ridiculousness of having to sign “a petition in support of an imaginary girl because I believe in real girls[…] having a fighting chance at hitting the target of self-esteem in life.” Quite.

Rhiannon Lucy Cosslett, co-creator of femininst blog The Vagenda, expressed a wish that “Brave had been around when I was a little girl, to show me an alternative to all those big-skirted damsels in distress, with their “some day my prince will come” and their serenading of small mammals.” My favourite reaction on Twitter was that of feminist writer and Times columnist Caitlin Moran, who cyber-screeched: “Don’t make me retreat into a world where the only role-models for my kids are a DOLL I make MYSELF out of a POTATO. DON’T FUCK CAPITALISM.” Meanwhile, my own mother – a strong, intelligent woman from Glasgow – was utterly bewildered when I emailed her the news. In her reply, she joked: “Don’t they know that Scottish women do not have big busts? Alas, we are notorious for storing all our fat in our bottoms and wee, short stumpy legs to keep us anchored in the gales.”

It didn’t take me long to find the petition on charge.org set up to try and force Disney’s hand. Entitled “Disney: Say No to the Merida Makeover, Keep Our Hero Brave!”, it has thus far garnered almost 233,000 signatures. On Thursday, the news came that Disney, despite previous statements that they would stand by the Glam Gargoyle, had withdrawn from their website all images of Exhibit B. Some people have taken this as a sign that the company has relented and will not use the sexualised Merida images on any of their Disney Princess products. I am highly sceptical. The petition is still open to signatures, and it’s important that as many people as possible show their support. For all we know, Disney could be biding their time, waiting to see if the anti-glam enthusiam peters out. Let’s not let that happen.