It seems Joan Collins’ much touted wish to see a revival of the super soap Dynasty – the show which revitalised her career in the 1980s, and made her a living legend in the world to TV and film – is to happen at last, though it appears without her involvement. 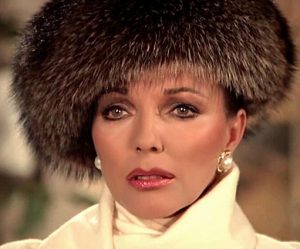 It was only a matter of time, after the success of the twenty first century reimagining of Dallas – Dynasty‘s arch rival in the primetime TV ratings – that the show which revolved around the boardroom and bedroom antics of the obscenely rich Blake Carrington (played by John Forsythe), his trophy wife Crystal (Linda Evans), numerous spoilt brat children and poisonous ex-wife Alexis (Collins) was resuscitated as well. 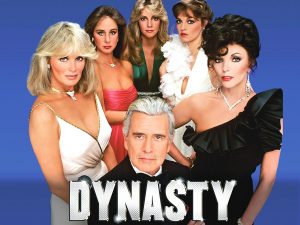 According to news just out the new show – to be broadcast by the American TV network CW – will have a whole new cast of actors and actresses playing the scheming Carrington clan from Colorado, and their close family relations from California, the Colbys, including such well known American stars as Nathalie Kelley, James Mackay and Grant Show.  As no date is yet set for the new programme to air, lets hope that there’s still time for its producers Stephanie Savage and Josh Schwartz (the duo behind the hit show Gossip Girl) to call on Collins and Evans to at least make cameo appearances.