The name speaks for itself ………

There may, if honest, really only be one secret agent film which everyone is waiting for this year.  If November however seems like a long way off, June will see the release of another genre film – albeit in a lighter vein – which should keep fans happy in the meantime. 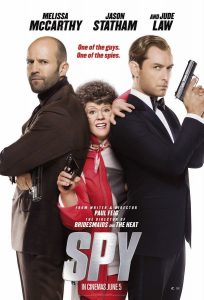 Spy (2015) – the comedy action film written and directed by Paul Feig and featuring Melissa McCarthy, Jason Statham and Jude Law – promises to provide ‘Bond”sh’ thrills laced with some genuinely clever and humorous touches: an original one blows the lid on the secret behind how all those suave and sophisticated agents manage to extricate themselves from endless, seemingly impossible situations without so much as a hair out of place. 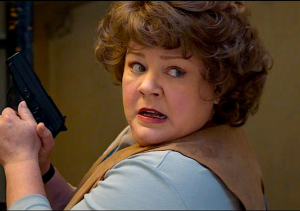 McCarthy stars as the mild-mannered CIA analyst Susan Cooper who, from the safety of her office, makes sure that life runs smoothly for the government’s top agents when they’re out in the field.  Unfortunately, after her partner Bradley Fine (Law) disappears and another agent Rick Ford (Statham) is landed in hot water, Cooper volunteers to get out there and help them with predictably disastrous results.  With Feig – who was responsible for such recent comedic hits as Bridesmaids (2011) and The Heat (2103) – at the helm, you can expect some suitable mad mishaps come 5th June, when the film is released in the UK and Ireland by 20th Century Fox.

Christmas Cracker: A Wish For Christmas (2016)