by Jessy Williams
in News

Happy Wednesday the 13th, everyone! It’s finally here – the first teaser trailer for The Nun! It’s a spooky one, so it’s most definitely not for the faint-hearted. You’ve been warned… do you think you’re brave enough?

From The Hallow director Corin Hardy, The Nun promises to be the darkest chapter of The Conjuring universe, which so far includes The Conjuring 1-3 and Annabelle and Annabelle: Creation. There is also a planned spin-off focusing on The Crooked Man from The Conjuring 2. Remember him and his crooked soul that spiralled into a crooked hell? Chilling. 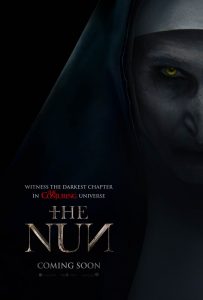 The Nun will follow what unfolds after a nun takes her own life in an abbey in Romania. A priest and a young nun are sent to investigate and are thrust into a terrifying nightmare, putting their very souls at risk. Enter Valak, the malevolent being from The Conjuring 2 who looks like she’s ready to do some seriously sinister scaring.

The short trailer teases a battle between good and evil, set against a backdrop of darkness and shadows. Perhaps they were being literal when they said this was to be the darkest chapter of the universe, because I can hardly see a bloody thing!

In all seriousness, it’s a short and sweet, unsettling and unnerving 90 seconds that showcases a very promising next chapter in the ever-expanding horror universe from James Wan (Saw, Insidious). DC, Marvel, eat your hearts out.

Hardy directs The Nun from a screenplay by It’s Gary Dauberman and you can catch the film in cinemas from 7th September 2018.