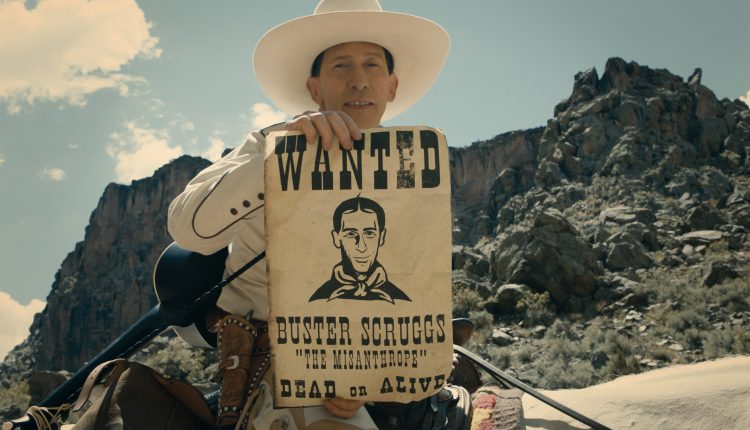 Originally announced as Netflix’s latest Hollywood auteur coup, having already scored Scorsese for his next generational mobster epic The Irishman and Alfonso Cuaron’s Roma, it turns out that the Coen Brothers’s projected television series for the streaming service has now been cut down to a single film. At least, that’s the form in which The Ballad of Buster Scruggs has premiered at the 75th Venice International Film Festival this week.

Conceived and announced as a six-part series to be released on Netflix later this year, The Ballad of Buster Scruggs has been rejiggered as a 132-minute feature. It’s still an anthology, broken up into half-a-dozen separate stories, you’ll just not have to make the minimal effort to hit the “Next episode” button to avoid watching five seconds of end credits scroll by.

The Ballad of Buster Scruggs stars Coen regular Tim Blake Nelson as the eponymous “sharp-shooting songster”, with each of the other stories lead by new additions to their repertory company, including Zoe Kazan, Liam Neeson, James Franco, Tyne Daly, and Tom Waits.

Compared to their previous entries in the Western genre, True Grit and No Country For Old Men (it’s set in the desert, people get shot, that’s a Western, right?), The Ballad of Buster Scruggs is apparently more on the zany, Hail Caesar! end of the Coen Brothers spectrum, as early reports out of Venice suggest an uneven but humorous tone throughout, with some suggesting it’s more of a “footnote” in their filmography rather than the latest Coen Classic.

While there are some new faces in front of the camera, behind-the-scenes The Ballad of Buster Scruggs sees the Coens reteaming with their regular musical collaborator Carter Burwell on scoring duties, and French cinematographer Bruno Delbonnel returning following his award-winning work on Inside Llewyn Davis.

The Ballad of Buster Scruggs will hit Netflix on November 16 2018, following a limited theatrical run.