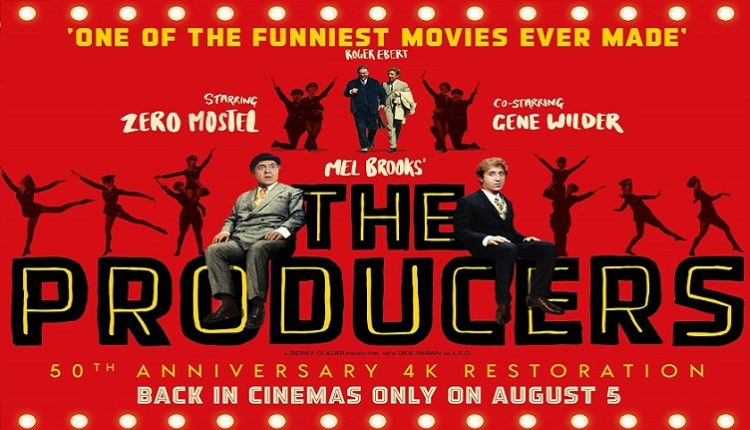 Mel Brooks’outrageous comedy classic The Producers will be returning to cinemas nationwide for one day only on 5th August 2018 following a glorious 4K restoration to mark the film’s 50th anniversary. The Oscar-winning feature will also include a very special Mel Brooks introduction from Turner Classic Movies.

Max Bialystock (Zero Mostel) is a washed-up Broadway producer forced to romance old ladies to finance his plays. When timid accountant Leo Bloom (Gene Wilder) is brought in to do his books, he inadvertently reveals to Bialystock that under the right circumstances, a producer could make more money with a flop than a hit. Bialystock cajoles Bloom into helping him achieve this end and together they come up with what they consider to be a sure-fire disaster waiting to happen – a musical version of Adolf and Eva’s love story entitled ‘Springtime For Hitler’. But is it possible that they might actually have the most unlikely hit of all time on their hands?

Directed by legendary filmmaker Mel Brooks (Young Frankenstein, Blazing Saddles), and starring Zero Mostel (The Front), Gene Wilder (Willy Wonka And The Chocolate Factory) and Estelle Winwood (Murder By Death), The Producers was adapted for Broadway in 2001, starring Nathan Lane and Matthew Broderick, and went on to win a record 12 Tony Awards.

STUDIOCANAL completed a brand new 4K restoration from a new scan of the original negative.

The Producers will be released in UK cinemas for one day only on August 5th and then on DVD/Blu-ray/EST on August 20th.