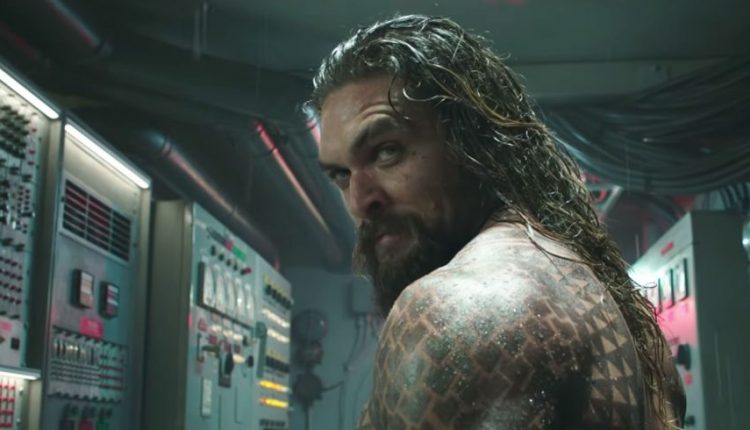 Former nerd pilgrimage-turned-Hollywood hype machine San Diego Comic-Con took place last weekend. Those wishing to attain the signatures of all original Power Rangers’ loss continues to be the movie buff’s gain, as between the panels, parties and PR shenanigans, a raft of new blockbuster teaser trailers premiered before swiftly being uploaded to YouTube. In fact, there were so many, we’ve decided to jam them all into a bumper edition of Trailer Park!

Naturally, being as this was nominally a comic convention and we’re in the year of our lord 2018, with “our lord” in this case being Stan Lee, there was a strong showing for superhero flicks at Comic-Con this year. Chief among them was the first trailer for James Wan’s Aquaman movie, with Game of Thrones star Jason Momoa reprising his role as the sea-faring hunk from Justice League.

His role was one of the better parts of that…flawed take on DC’s superheroes teaming up, and his level of charm and screen presence doesn’t appear to have been watered down here. Throw in some classic battle-for-the-throne conflict, a mysterious childhood, and an assured lack of meaningful crossovers with other DC heroes thanks to the underwater setting, and this has a chance of being a Wonder Woman-style surprise hit!

Wan previously struck gold with the original Saw, The Conjuring and Insidious films, graduating to big-budget action spectacle with 2015’s Furious 7. He’s also accumulated a pretty stacked cast, with Amber Heard as Momoa’s presumed love interest Mera, Willem Defoe as Aquaman’s mentor in all thinks Atlantis, Patrick Wilson as his war-mongering half-brother, and apparently Dolph Lundgren and Nicole Kidman are in there somewhere too?

Aquaman will make a splash into cinemas on December 21 2018

There was little-to-nothing on show from Marvel at Comic-Con, but then, what do they have to prove at this point? Everyone’s locked in for another century of MCU entries, with Kevin Feige presumably spending what little downtime he has between projects searching for the secret of immortality. DC, meanwhile, have a bad rep for over-serious, grim-and-gritty films which don’t warrant being four hours long.

So far there have been two approaches: the Aquaman one which, as with Wonder Woman before it, allows the filmmakers to have some fun and personality amidst the high-stakes superhero drama. Then there’s taking the darkness of Batman v Superman and throwing more than a little light on it, as with our first look at Shazam!

Pinged from foster home to foster home, orphaned Billy Batson (Asher Angel) has plenty of reason to be angsty. Unlike grown adult Bruce Wayne, however, when he gains the ability to transform into an grown-up (Zachary Levi) with superpowers (from the eponymous wizard, played by Djimon Hounsou) he revels in everything that comes with it: from fighting crime to doing pranks with foster brother Freddy (Jack Dylan Grazer). It’s like Big, but comics!

The last big superhero trailer to drop at Comic-Con had neither Marvel nor DC connected to it. It isn’t even based on a comic book. Glass has plenty of bonafides regardless. The third part to the trilogy, beginning with Unbreakable and continuing with the surprise ending of 2016’s Split, M Night Shyamalan’s career rehabilitation following a (well deserved) turn in Hollywood jail looks set to be fully confirmed with this psychological superhero crossover.

This first tease of the film sees Bruce Willis‘s invulnerable David Dunn and Samuel L Jackson‘s brittle-boned evil mastermind Mr Glass, both introduced in Shyamalan’s Unbreakable (2000), meeting up with James McAvoy‘s multiple-personality cannibal Kevin Wendell Crumb in some sort of facility run by Sarah Paulson, who doubts the veracity of the group’s claims of superhumanity.

Once upon a time, Shyamalan was posited as the next Spielberg. Our disappointment when he failed to reach those heights, with the increasing preposterousness of the twists in the likes of The Village and Lady in the Water, was as much the result of mismatched expectations as those being bad films. He’s a cheesy genre director, through and through, and Glass looks like that sort of movie to the hilt.

Glass will crash straight into multiplexes on January 18 2019.

Speaking of monsters and unexpected sequels, it looks like the follow-up to Gareth Edwards’s miltaristic take on Godzilla is going to maintain a steady terrestrial presence — with Kyle Chandler, Vera Farmiga, Stranger Things star Millie Bobby Brown, and Sally Hawkins among those on the human side of things — with its sequel, whilst also ramping up the amount of kaiju-battling, city-smashing mayhem.

It is called Godzilla: King of the Monsters, after all. Monsters, plural. Along with that glittering array of stars, the trailer for Michael Dougherty’s sequel also grants us a first pass over the Americanised versions of classic Japanese rubber suit monsters Mothra and Rodan, with the three-headed King Ghidorah also due to be making an appearance.

The film also suggests some links with last year’s Kong: Skull Island, which featured the misadventures of shadowy monster-tracking/hunting organisation Monarch in the sixties. So besides featuring lots of monster mashes coming up in the short term, this trailer also hints at the forthcoming Godzilla vs King Kong. It’s a good time to love monsters!

Godzilla: King of the Monsters is unleashed like an blast of fiery atomic breath on May 31 2019.

And last but by no means least, the latest trailer for Fantastic Beasts sequel The Crimes of Grindelwald debuted at this year’s Comic-Con as well. The footage features Jude Law as a young Albus Dumbledore, recruiting a reluctant Newt Scamander (Eddie Redmayne) into the battle against haggard, evil and past-his-best wizard Grindelwald (played by Johnny Depp, wonder what made them think of him…)

Again scripted by Harry Potter creator JK Rowling and directed by David Yates — who helmed the last four Potter films, too — the film features the returning cast of Tina (Katherine Waterston), Jacob (Dan Fogler), and Queenie (Alison Sudol), as well as the addition of Law, Depp, and Zoë Kravitz as Leta Lestrange.

Buckle in, wizarding types, because apparently we’re not even halfway through the Fantastic Beasts series. The Crimes of Grindelwald is only the second of a projected five films, with the third set to hit in 2020. Let’s hope for everyone’s sake this one is a hit!

Fantastic Beasts: The Crimes of Grindelwald will apparate into theatres 16 November 2018.