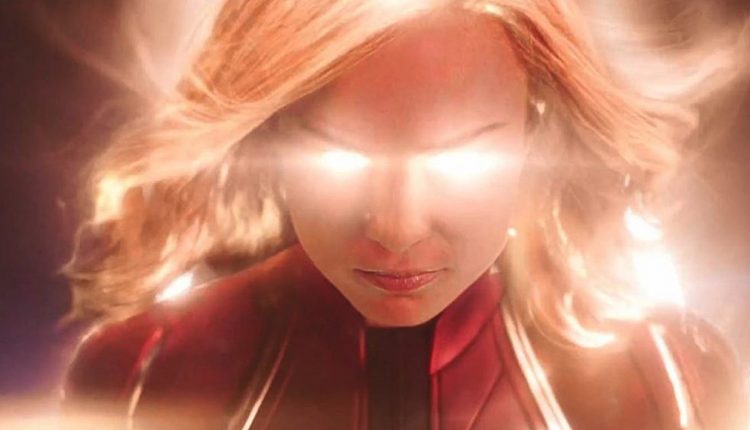 For those expecting the next entry in the Marvel Cinematic Universe to deal with the fallout of Avengers: Infinity War‘s gob-smacking climax, hold up. The first trailer for Captain Marvel takes great pains to avoid responsibility. After all, this is technically a period piece. You can tell, because this teaser opens with the eponymous heroine (played by Room‘s Brie Larson) falling from the stratosphere, straight through the roof of a Blockbuster Video.

Try explaining that to your kids. Even more disconcerting is this Captain Marvel trailer offers the first proper look at Samuel L Jackson‘s Nick Fury, pre-eyepatch. Yes, this a Marvel Cinematic Universe set significantly before the rest of the entries in the franchise thus far. Want to feel old? This movie is set in the nineties, which is now sufficiently far enough in the past it’s considered a “period” setting for movies.

Anyway, there’s plenty more on offer here besides shaking my millennial sense of self-worth and invoking the dread spectre of the reaper walking ever closer behind me. As confirmed in those production photos released earlier this month, Captain Marvel will feature Larson’s Carol Danvers facing an alien invasion lead by the shapeshifting Skrulls, whose ability to take on other forms explains the part where she cold-cocks an elderly woman in the face. Probably.

There’s not really enough evidence here to judge if Captain Marvel diverges from the usual Marvel tone in the way that Guardians of the Galaxy and Ant-Man so successfully managed — this being the blockbuster debut of indie drama royalty Anna Boden and Ryan Fleck — but it does suggest a twist on the source material. Traditionally, Carol Danvers is a pilot who becomes Captain Marvel after an encounter with an older iteration of the cosmic hero, who is a member of the alien Kree race.

Here Carol crashes down to Earth and meets a young, fresh-faced, pre-S.H.I.E.L.D. Nick Fury, and appears to have been struck with a case of amnesia regarding both her previous life on the pale blue dot and her time with the Kree. There’s even the suggestion of some Total Recall-esque fake memory shenanigans, as Larson’s narration mentions not being able to trust her own reminisces.

Intriguing! Well, at the time of posting, the Captain Marvel trailer already has over six million views, no doubt buoyed by the broadly positive response from fans and comic creators including Kelly Sue Deconnick alike, so you probably don’t me to convince you further to check it out..

To All The Boys I’ve Loved Before: Flickfeast and Chill Film Review