Trailer Park: It’s a Red-Band One for The Predator

by Jessy Williams
in Trailer Park

Now, this is a trailer. I wasn’t too excited about the first footage from The Predator, but after this trailer, I am on-board! It may be a little spoiler-ific – so be wary if you don’t want to see too much – but this new red-band trailer is action-packed and filled with exciting, violent moments featuring Predator (or shall I say, Predators) itself. The hunt, indeed is on. 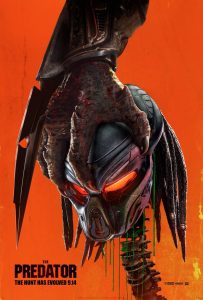 In this new Predator tail, a young boy accidentally (woops!) prompts the return to our planet of some well-known, dangerous creatures. As you’d expect, all hell ensues and it’s up to a teacher and some badass ex-soldiers to save the world. Can they do it?!

Shane Black is at the helm of this new Predator feature and after directing Kiss Kiss Bang Bang, Iron Man 3 and 2016’s hilarious The Nice Guys, he has proved that he can brilliantly blend action and comedy. Although this new trailer treads a more horror-based and intense route, the earlier teaser did showcase some, hopefully needed, humour.

The Predator will be unleashed to hunt in cinemas, including IMAX on 14th September 2018. Not long now!