It’s in the trees. It’s coming …… Beware of the Wind Walkers this autumn!

Viewers will need a strong stomach if they intend watching Wind Walkers – the new horror thriller from TriCoast Worldwide, Iron Circle Pictures and Sweet Tomato Films, in association with Ricou Browning Productions – which is set for release this autumn in the US and the UK. Written and directed by Russell Friedenberg, the American film-maker also stars in the chiller alongside wellknown faces Glen Powell and Zane Holtz along with newcomer Johnny Sequoyah and the appropriately named Rudy Youngblood. 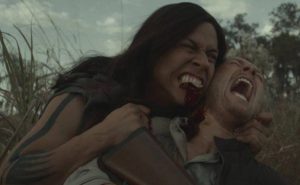 The film focuses around the events which befall a family and their friends who embark on their annual hunting trip to the American Everglades, only to find themselves the prey of evil and malignant forces haunting the wild and lonely swamplands. Speaking about the film Friedenberg described the location as being as hostile as the creatures which haunt it in the film. “The experience of making Wind Walkers was incredibly rewarding and ridiculously difficult. The Everglades aren’t meant for humans. We shouldn’t have been there, and everything that lives there does it’s damndest to remind you of that. What thrives in the Everglades are things with cold blood, and all of them crave warm blood – namely yours”.

Going by the new stills just released to publicise the film the said warm blood will be flowing freely. You have been warned.

Dead By Dawn 2014: The Essential Overview