Accident Man initially comes across like a tale as old as time: an assassin goes on a revenge mission to find out which colleague killed bae and all-out ass-kicking ensues. Which all sounds fine. If you’re into that sort of thing.

If you are into that sort of thing, then you know what to expect from Scott Adkins: his fight scenes here are full of flare yet easy to follow and you can see the painstaking attention that goes into looking like he’s inflicting pain.

However, as a writer, Adkins is well aware of the tropes that tire the action genre and that he uses them to his advantage is no accident. This is evident from the trailer’s; “Yeah, yeah, you’ve already seen all the assassins movies and all their sequels, right?” and like that, Adkins has already disarmed any film snobs, this writer included. The humorous tone and gimmicks make Accident Man stand out from the crowd. 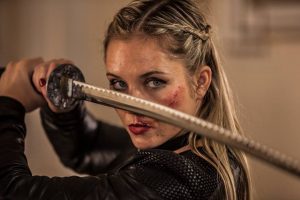 Adkins’ narration as Fallon flows throughout the film and not only adds a noir-esque edge, but also levels of characterisation that’s typically missing in action films.These aren’t just guys kicking ten shades of shit out of each other; these are mates who were having beer bants just a few hours previously. As a result, there’s mixed emotions to be had when they eventually get off’d. But hey, they’re assassins. It’s a job hazard, right?

Michael Jai White and Ray Park’s Mick and Mac (Darth Maul and Spawn in a tag team!) steal every scene they’re in, whilst Perry Benson (This is England) as Finicky Fred is funny AF. Amy Johnston as Jane the Ripper is an essential addition to the source material and would give Kill Bill‘s The Bride a run for her money. The only character who feels thinly sketched is Poison Pete which is a shame, as he’s the butt of many a joke whilst he’s around.

It would be remiss not to mention Adkins’ merits as the main man, Fallon. Adkins (The Expendables 2, El Gringo) wears an anti-hero like a second skin: you know you shouldn’t be rooting for him as he kills and quips his way throughout his day, but damn, he’s a bad-man gangsta!  It’s just a shame that we don’t get to see more of his gimmick. 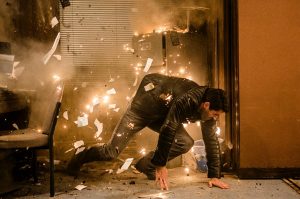 The Accident Man himself offs his targets by making them look like it’s a case of “where there’s blame, there’s a claim.” I mean, who doesn’t like a good look at an accident? But instead of more of this, Director Jessy V.Johnson gives us a flashback which details Fallon’s background and training (albeit perfectly soundtracked by The Jam) which impedes the forward momentum of the narrative for a character that we’re already invested in.

There’s more to the plot than you expect too, and once the credits roll, you’re tempted to go straight back in for a rewatch to catch any missed details. However, it seems a little hastily hemmed-in and the impact of what could have seemed labyrinthine is lost. Still, any excuse (and a good reason) for another viewing.

Accident Man is an assassin movie with a sequel that I actually want to see. You should too.

Accident Man is available on DVD and Digital Download on the 16th of April.