by Chris Watt
in Reviews

A sense of longing and regret permeates every frame of Animus, a bold, beautifully paced short film from writer/director Mark J. Blackman.

At a mere 12 minutes in length, the film feels surprisingly still (in the best possible sense), creating a tone that marries a flowing, dream-like visual style, to two performances of remarkable naturalism and emotional resonance.

A two hander, the story revolves around a dialogue between Sienna (Katie Goldfinch) and Elliot (Johnny Sachon), two ex-lovers, reunited under the worst of circumstances. Something has compelled Sienna to visit her old flame, and through a discussion around a kitchen table, their past, their present and their future, spill out in layers of beautifully judged dialogue, each line laced with double meaning, bitterness and aching regret.

Given that the film is essentially one scene, you’d be forgiven for thinking that Blackman would stage the proceedings with a matter of fact aesthetic. In truth, what he does visually is to craft an atmosphere, through steely blues and greys, emphasized by pin sharp photography from Beatriz Sastre. The look of the film is the feel of the film, and that same bittersweet longing and sadness is reinforced by this style.

Editing plays its part too, the cutting precise and important, utilising close ups, while hinting at subtext through body language (a hand gesture here, an eye flicker there), complimenting the performances. 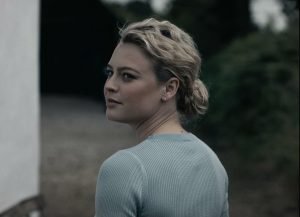 And what performances they are. Sachon’s portrait of a man who has retreated from life, is never overplayed. Indeed, his work here is subtle, Elliot’s predicament having become almost a whimsical joke to him. Goldfinch, meanwhile, plays Sienna as a woman torn, her affections for her ex-partner matched by her attempts to hide her discomfort at a future in which she is settling for someone, rather than falling for them.

Together, the two bounce off each other, and, given the films length, craft an amazingly complex relationship that has lived and breathed before we, the audience, even got to this point. Crafting a believable relationship on film is an incredibly hard task, one that even the most seasoned of veterans can screw up, and yet, the chemistry between Goldfinch and Sachon is impeccable, drawing us in to the drama that, no matter how wrought, never once feels anything but naturalistic.

As intimate drama goes, Animus is wonderfully layered, focused and even, at times, lyrical, utilsing the remote location where the character of Elliot lives, to juxtapose the internal life he has chosen to lead, the bleak beauty of the countryside a perfect backdrop for his struggles with the past he can’t forget, and a future that is horribly innevitable.

Blackman’s film is about resignation, about the very human trait of moving on, yet never letting go. The camera floats, glides, slips in and out of slow motion, like a collage of moments, in a cinematic slideshow. But it is in the small glances, the touch of a hand, or the kiss of a cheek, that this film’s real power lies. 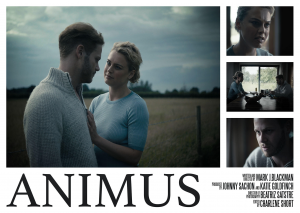