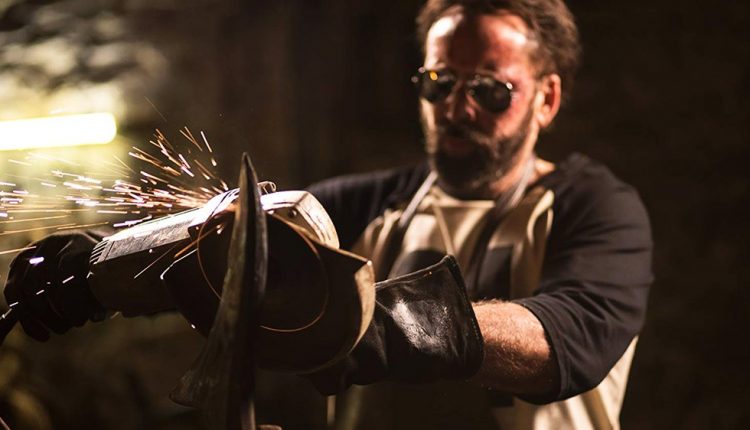 Last month we had a TV show produced via an algorithm, and now we have Mandy, not so much a film as a cynical attempt to appeal to a Midnight Movie crowd with none of the wit, charm or genuine peculiarity of an actual grindhouse flick. It’s that “Nicolas Cage losing his shit” YouTube compilation stretched to feature length, affectations of imagery and performance removed from their context and memeified. Its cinematography and soundtrack scream at you “THIS IS A CULT FILM!”

It’s a film made by one of those machine learning bots fed the entire Death Waltz Records catalogue. It feels like writer/director Panos Cosmatos made a decided to usurp El Topo as the film of choice for limp dick rock bands to play behind them on-stage during gigs in East London warehouses. Cage himself stars as a tree cutter whose lover (Andrea Riseborough) is kidnapped by a murderous cult and then seeks bloody revenge. It takes a torturous hour of set up for the claret-letting to begin, though.

The torpid first half of Mandy is a real drag to watch. The moments of supposedly hallucinogenic, shocking or gory imagery that emerge between Cage and Riseborough’s tedious conversations and the dreary monologues of Linus Roache as the cult leader have no effect because it’s all shot in the same way. The eruptions of the uncanny in, say, Ben Wheatley’s Kill List are so disquieting because the rest of the film looks like a bog-standard, low-budget, shot-on-digital British gangster movie.

Mandy holds the same affected aesthetic throughout, all fetishistic 35mm film grain, impressionistic blue-red lighting, designed to be screenshotted and turned into gifs but wearying to have to sit through two hours of. The second half, with Cage engaging in chainsaw fights with the cult members and a group of leather-clad bikers baldly patterned on Hellraiser‘s Cenobites, is similarly cynically geared towards making crowds at genre film festivals cheer at the gore and Cage’s mad expressions.

The worst part is that Cosmatos doesn’t even seem to like the genre and films he is paying homage to. There’s something joyless, airless to much of Mandy, like a Kill Bill made by someone who was held at gunpoint and forced to watch a week’s worth of Alamo Drafthouse programming before shooting a film based on the experience.

There is a lot of talent on board in Mandy. The wonderful Riseborough is undeserved, made up with scars and thinning eyebrows presumably so you accept the twenty-years-her-senior Cage as a convincing romantic partner. She disappears halfway through and is recast in brief animated sequences, illustrated in a Heavy Metal style, where she’s completely nude. This is also one of the last projects of Jóhann Jóhannsson, who died tragically at the start of 2018, but his Tangerine Dream pastiche of a score only adds to the dirge-like pace.

Mandy is a film I would have enjoyed a great deal as a 14-year-old. It will likely bring a lot of people joy. That’s fine! And there are certainly films produced with a similar level of cynicism which are nevertheless artistically triumphant. Most of the classics of the Hollywood studio system were, more or less, produced by committee. Taika Waititi managed to stand out from the MCU crowd with Thor: Ragnarok. Sam Raimi made The Evil Dead as his first feature because he did market research and found that horror films were the most profitable box office prospects.

There is something so clearly calculated about Mandy that it’s sort of insulting, or condescending? It’s a self-aware Nicolas Cage performance, which is not the reason we like his usual unhinged screen persona, in the same way that intentionally “bad” movies lack the thrill of genuine messes like Trolls 2 or Plan 9 From Outer Space. It’s too premeditated to ever be genuinely transgressive, even when ceremonial axes are being shoved down throats and mountains of cocaine are being snorted off broken glass.

Mandy is as convincing as a cult film as two kids standing one atop the other in a trenchcoat is a real adult. It’s as radical as a Funko Pop. It’s probably going to do really, really well.