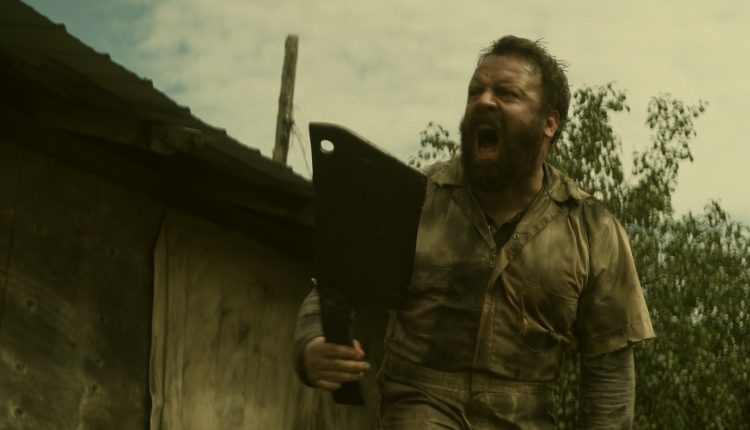 Directed by Adrian Langley, Butchers follows a family of killers who prey on the innocent travellers they happen to cross paths with. What ensues is an expectedly vicious, but wholly unoriginal 90 minutes of blood and mayhem.

The film focuses on 2 couples who get into car trouble, forcing them to venture into the closest town for help. They discover a quiet gas station run by a bit of a kook and his brother, who unsurprisingly, are hiding a murderous secret. The pair like to butcher people! They have pregnant woman with her tongue cut out held captive and are keen to find more people they can mess with.

Butchers’ choice of horror tropes are tried and tested, but the decision to steal from every slasher film you can recall — from The Texas Chainsaw Massacre to Rob Zombie’s more modern offerings House of 1000 Corpses and 31 – makes the film feel familiar in the worst way. It ticks all the boxes for what you’d expect to find and that is what continues to make the film unsatisfying. If you watch the film hoping for something surprising or unique to occur, you’ll be sadly and continually disappointed.

The characters make a multitude of bad decisions, from dropping their weapons to handing knives to people who could best do without one. It’ll have you with your head in your hands as the final credits roll, wondering what the point of it all was. Sigh.

For those of love their horror with heavy does of blood and torture, you’ll be glad to know that Butchers is expectedly grim and nasty. It’s filled with bone-crunching violence and ear-piercing screams set within a typically backwoods setting. It’s undoubtedly a scary watch, but its refusal to puts its own stamp on proceedings makes it feels lacklustre and eventually forgettable.

Butchers is jumpy and grisly, but uninspired and mostly tiresome. By choosing to play it safe, rather than attempt something previously unseen or unexpected, Butchers resigns itself as a mere drop in an ocean already filled with crazed killers and butchering.

Butchers will be available on all major digital stores from 22nd February and coinciding with National Butchers Week, available on DVD from 8th March.