This all-action buddy movie courtesy of Icelandic director Baltasar Kormakur pits Denzel Washington and Mark Wahlberg as two criminal comrades with uncertain loyalties. It’s revealed early on that both men are secretly undercover for different government agencies and from there the pair begin to flit between being brothers in arms and bitter rivals. The plot sees the duo conduct a bank robbery, planning only to rob a relatively meagre amount from a drug cartel, only to ultimately wind up robbing considerably more from the CIA. Soon the pair are engaged in a criss-crossing game of cat and mouse involving the DEA, Naval Intelligence, CIA and the Cartel.

Everything about 2 Guns seems fairly generic and there’s always a sense you’ve seen something similar in a much better movie. The plot feels like a throwback to a long-forgotten early-90s action movie and the action sequences themselves are all wholly unremarkable. That all being said though, the film does have one considerable redeeming feature which ensures that it winds up a perfectly enjoyable actioner, namely a strong and game cast. Particular credit should go to its two affable leads. Washington and Wahlberg have a great time doling out Shane Black-esque quips and dispatching bad guys all whilst barely breaking a sweat. Without these two in the lead roles the film would barely register but with the pair both on fine form, Washington as the cool-as-ice old hand and Wahlberg the mouthy young buck,  you’re more than happy to just sit back and let them go at it. 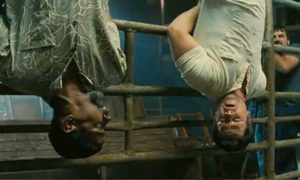 Bill Paxton and Edward James Olmos also provide great support. Paxton is a thoroughly detestable CIA agent who shoots and tortures whoever he pleases to get his money back, while Olmos is likewise loathsome as a vicious drug kingpin with some particularly angry bulls. Everyone seems to be very aware of the kind of the film they are in with silliness and levity very much the order of the day. There are some regular bursts of vicious and bloody action, and while none of it is especially creative, Kormakur ensures that the gun battles and explosions contemplate the playful tone of the film nicely.

Surprisingly, there are no real shocks to be found along the way despite all the various crosses and double crosses. It’s all very telegraphed and as you’re watching the story unfold, you find yourself longing for it to just get back to the two leads bickering and bantering with one another instead. In this regard it does perhaps feel a little over-stretched, and there’s not really enough plot to go around. You get the impression the initial premise was just ‘two undercover agents accidentally rip off the CIA and a melee ensues’, and things were never really fleshed out from there. Corruption and rivalry at the heart of government agencies plays a vital part in the movie but is not really addressed at all. Likewise a romance angle of sorts between Washington and a fellow DEA agent is only ever lightly touched on and feels noticeably undercooked. All these shenanigans just form a vague backdrop however to the central story of two guys and the mess they find themselves in, luckily the two leads have the magnetism and charm to shoulder the burden. 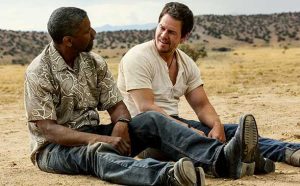 It won’t be a film you revisit very often, but if you want an easy and unassuming watch, it’s a serviceable action movie buoyed by its charismatic leads.