Later going on to helm Leaving Las Vegas and The Sopranos amongst others, Mike Figgis’ directorial debut feature flaunts a fledgling director’s passion for film-making. Lovingly crafted, Stormy Monday (so called, presumably after the T Bone Walker song) is a noir-influenced gangster pic, informed by Figgis’ upbringing in 50’s and 60’s Newcastle and soundtracked by syncopated jazz stylings. 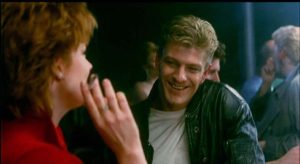 The imagery on display is inspired. The roadside wreckage of a band’s touring van is a powerful metaphor for the death of Rhythm & Blues, as audio tape, guitars and drum shells are strewn across the motorway. A cleverly framed sequence also juxtaposes the characters in a diner scene that doffs its cap to The Boulevard of Broken Dreams that featured James Dean, Marilyn Monroe et al. It’s not all eye candy though: As things turn sour, there’s a squeamish scene that almost rivals the infamous hobbling from Misery.

All this motions towards the film’s finest point. Relocating the LA noir-esque sentiments to the North East of England is a masterstroke: Subverting the genre and at once evoking both the familiar and the unsettling, the intimate and the alien. Set during Newcastle’s “American Week”, Star and Stripes hang on the wall, whilst cheerleaders pound the cobbled streets and sailors fight over spilt drinks. It still manages to retain the heart beat of Britishness. 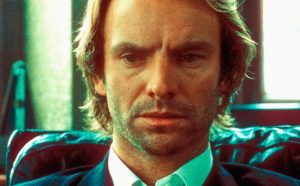 Sadly, the performances make the film feel slightly out of tune. Sting keeps forgetting his Geordie accent whilst Sean Bean, in only his third feature-length performance as Brendan, hasn’t quite found his confidence yet. Although he is young, naive and sucked into the crossfire so it can be excused as part of his character. A pre-Working Girl Griffiths brings the star power but little else whilst Tommy Lee Jones is uncharacteristically understated as Mr Cosmo, where a powerhouse performance may have helped raise everyone’s game.

The breakout performance, however goes to the music. From Jazz that treads that fine line between genius and an all-out racket, to club owner Finney’s (Sting) tension-building double-bass, to a version of The Spangled Banner that would have made Hendrix blush.

As a commentary on 80’s Anglo-American relations and Thatcher’s Britain,Stormy Monday is undoubtedly an interesting watch but it does struggle to transcend the constraints of it’s context. The narrative is compelling but the characters fall short of making us care. Less of a storm, more of a strong gust.

Stormy Monday is out on Dual format on the 10th of July.

Extras include a commentary by Mike Figgis, a new video appreciation by critic Neil Young, a tour of the Newcastle locations, reversible sleeve artwork and a booklet with new writing by critic Mark Cunliffe.