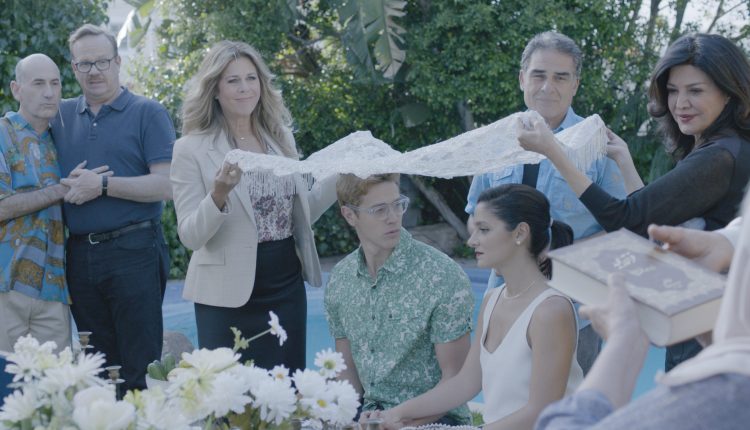 As with the backgrounds to so many weddings in real-life, those at the centre of director / writer Sara Zandieh’s new romantic comedy A Simple Wedding, are anything but simple. In fact the story – involving the relationship between an Iranian-American lawyer and a happy-go-lucky, bi-sexual Californian artist / DJ – also manages in its short running time to introduce divorce, co-habiting, gay and lesbianism, and interracial / interfaith marriage, all against the languid backdrop of a hot and hazy contemporary Los Angeles.

Nousha Husseini (Tara Grammy) is a young Iranian / American woman living in L.A. with her traditionalist Iranian parents and grandmother, who have plans for her to follow the well trodden path to an arranged marriage. But nothing could be further from Nousha’s mind, who has dreams of marrying for love or not marrying at all. Then one day she meets the unconventional Alex (Christopher O’Shea) who, with his own complex and mixed up family, isn’t quite what Nousha – or her family – had in mind as her ideal partner. And then the fun really starts.

The premise behind the film – if you can see beyond the various comings and goings between Nousha and Alex’s families and friends – is reasonably simple, to the extent you can pretty much predict the outcome from about twenty minutes in. In fact so basic is it, you can’t help feeling the filmmakers threw into the mix the multiple sexual, ethnic and religious themes simply to spice up an otherwise mundane plot-line and allow for plenty of the inevitably close-to-the-bone and risqué jokes seemingly obligatory to most contemporary modern comedy.

The acting by the main cast – of whom Rita ‘Mrs Hanks’ Wilson, Shohreh Aghdashloo and Maz Jobrani are probably best known – is believable and, set against a backdrop of affluent L.A. life, keeps the action from dragging, whilst the script by Zandieh and co-writer Stephanie Wu is witty if not particularly original. The bigger question however is why A Simple Wedding took so long to be released.

Made in 2018 and first screened at the Los Angeles Film Festival in September of that year, it did the rounds of the American film festival circuit the following year, before being released there generally on Valentine’s Day this year, and on DVD in the UK this month. That it hasn’t come here until now one can only think is due to the turmoil the film industry has been experiencing with the current global pandemic.

If this is the case the delay may actually have played in the film’s favour. With so many still under general lockdown, people are filling their time catching up on films and television shows that would usually otherwise pass them by. In which case there could be a worse way of spending eighty odd minutes than watching A Simple Wedding. It likely won’t win many awards in the rom-com stakes, but as a piece of light escapism – and as long as you keep an open mind in regards to sex and religion – you could do worse.