We’ve all been there: your generic TV HD recording box is at critical mass; your streaming service sits unused, yet you’re considering signing up for the rival’s free trial so you can watch that new show you keep hearing all about. American Gods is one such show. But is it worth the data or dvd shelf space? Let Flickfeast take you to church.

Things get real weird, real fast when Shadow Moon (actual name) gets released from prison early, only to find his wife simultaneously dead and adulterous and a mysterious man called Wednesday (Ian McShane) eager to offer him employment opportunities. As you’d expect, this quickly escalates into Shadow (Ricky Whittle) bar-fighting a 6ft5 leprechaun (Pablo Schreiber) over a lucky coin and later getting lynched by faceless cyber henchmen. In short, a storm is coming and shadow’s in the way.

Written by Neil Gaiman, the font of all knowledge on mythology with a taste for the macabre, there was always the feeling that this wouldn’t be an easy ride, but it’s all the more rewarding for it. The author of Coraline , The Graveyard Book and more recently, Norse Mythology has layered a complex narrative where religious figures, myths and monsters are amongst men with a powerplay thrown into the mix. Imagine Lost starring Ray Donovan and you’re still nowhere close. 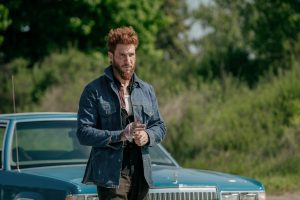 Musically and visually, American Gods is as rich and textured as the characters’ multi-millennia worth of backstory: Blood spills so beautifully that you’re almost oblivious that you’ve just seen a man split in half by a swift kick to the love spuds; the characters are striking and cosplayers will be grateful come convention time (Gillian Anderson as Bowie, anyone?) and the palatte is how you’d picture a technicolour version of Sin City. The soundtrack selection is also enlightening and poignant, never more so than Mark Lanegan’s rendition of Lead Belly’s ‘Where did you Sleep Last Night?’ and Shirley Manson’s ‘Queen of the Bored’.

In addition to the subject matter, the show is inventive and ultimately engaging, employing stop motion and CGI scenes alongside live action to portray the myths and inform the episodes. It’s testament to the ambition and enthusiasm that’s gone into production that each episode has the ability to surprise. Please pardon the gushing.

So, is American Gods sent from heaven? Not quite. Based on the first half of the season, and with eight episodes still to go, there is a danger that ambition could trip the show up. The possibility of each episode introducing a new ‘God’ may end up feeling formulaic and throwaway, whilst excessive flashback episodes might mean minimal forward momentum (which Ep 7 was certainly guilty of).

However, with so much going for it, it still inspires faith. Lovejoy, sorry, McShane gives a career best performance whilst Anderson and Schreiber clearly have a blast, leaving relative newcomers Whittle and Browning (as Laura Moon) upping their game in response. The show is effective either as part of a bingeathon or with space between episodes for you to go away and research your theories. So in closing, is it worth becoming a disciple?

The Complete Season One is out on BluRay, DVD and Digital on the 31st July.