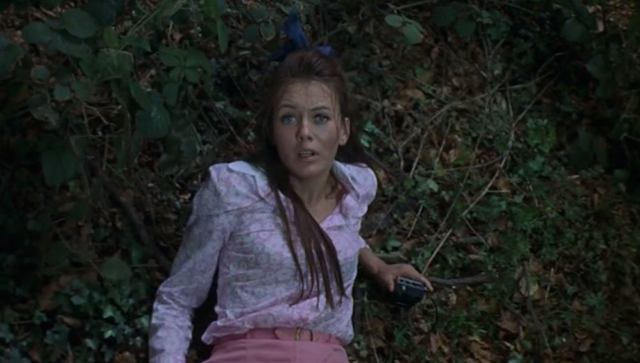 The premise behind the thriller Assault by director Sidney Hayers (who directed TV’s The Avengers and The New Avengers) is almost as scant as it is unpleasant, so we will attempt to keep this bit brief. Pupils at a private school for young ladies are being attacked by a sexual predator in woods joining the school’s grounds. After one of the girls is murdered, the school’s art teacher Julie West (Suzy Kendall) hatches a plan to lure the murderer into the open, with disastrous results.

They say everyone has to start somewhere. It’s likely though that the actresses in Assault – including a young Lesley-Anne Down – would probably rather forget their appearance in this early 70’s sex crime potboiler. Almost without exception the women here are nubile and either assaulted, molested or dismissed out-of-hand by the male members of the cast.

In fact it’s hard, whilst watching the film, to escape its overtly male chauvinistic tones. From the central subject matter – a sex pervert who rapes and murders the pupils from a posh private girl’s school – to the way even the supposedly law abiding males treat the females with barely disguised contempt, it’s definitely men who have the upper hand here: if some guy calling women ‘luv’ whilst slapping their bottoms or ogling their chests offends your sensibilities, then this probably isn’t the film for you. This behaviour however, though jarringly out-of-place in today’s society, was perfectly acceptable – and indeed in some cases expected – fifty years ago. As a result, if considered in the light of the period in which it was made, then Assault could be seen as a perfect screen visualisation of a time when sexual inequality was still rife.

Despite a good cast – along with Lesley-Anne Down, who thankfully went on to better things, and Kendall who was something of a sex symbol in early 70’s cinema, you have British stalwarts Frank Finlay and Freddie Jones – and some marvellously atmospheric scenes in the woods where the attacks on the girls take place, there is very little to recommend the film. The juxtaposition between its drama-like approach during its general play out and the surprisingly gratuitous and graphic sexual assaults which sporadically pepper the action, makes for an unpleasant, often uncomfortable, viewing experience.

One final point which should be highlighted is the film’s ability to keep the viewer guessing as to the identity of the fiend who is carrying out the crimes. Every man – even those in the police – are possible suspects, and the film manages to keep this secret intact until the closing scenes. However as none of those in question are particlaulrly pleasant, you are likely to feel little concern as to who the guilty party actually is.

A range of alternative titles for the film’s rerelease abroad, suggested heavily devilish goings on, which in reality never materialise. In America it was released in cinema’s as In the Devil’s Garden and later reissued as Satan’s Playthings, whilst on TV there it appeared as Tower of Terror, with likely reference to an electricity pylon in the woods where the attacks take place, and which features heavily throughout the film. These misleading titles are simply another aspect of the production which disappoints, making this film really only of interest to those with a penchant for 70’s curiosities.