To be honest, John Carpenter’s career has been a case of hit or miss.  You have In the Mouth of Madness and Ghosts of Mars on one end of the spectrum and the other you have Halloween, The Thing and this classic fantasy action-comedy that nicely blends Eastern and Western cultures.

Big Trouble in Little China sees cocky truck driver Jack Burton (Kurt Russell in his fourth collaboration with Carpenter) help his friend Wang Chi (Dennis Dun) rescue his green-eyed fiancee Miao Yin (Suzee Pai), who has been kidnapped by a Chinatown street gang.  They are ultimately drawn into the mystical underworld underneath San Francisco’s Chinatown as they encounter a legendary sorcerer Lo Pan (James Hong), who needs Miao Yin to make him mortal.

Even though it is now labelled a cult classic, the initial critical and box office failure of Big Trouble made Carpenter turn towards independent filmmaking and given its fellow 80s movies – the majority of them belong to the comedy or sci-fi genres – it needed to have something different to make it stand out against other films of its generation.  In a certain respect, it falls short by a hairsbreadth.

In terms of story, it is very far-fetched and very unlike John Carpenter – a director more associated with horror and suspense.  The idea of Chinese black magic is rarely touched upon in cinema so to see it in such a contemporary setting (at the time) made it all the more weird, which isn’t really helped by the sometimes imperfect special effects.  There is just an imbalance between the incomprehensible and the entertaining and for someone who watches it for the first time, it comes across as laughable.

But in all fairness, that’s probably why Big Trouble is such a cult film.  Russell is a likeable star in the reluctant hero Burton and Dun a more-than-capable wingman.  Cattrall tries to be a sassy love interest in Gracie Law but ultimately becomes a glorified damsel in distress. The film’s true stars are Chinese American legends James Hong and Victor Wong, whose respective character performances as Lo Pan and Egg Shen prove that there is more to Chinese actors than martial arts. 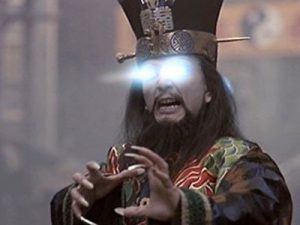 Sure, it is predictable and occasionally ridiculous, but Big Trouble in Little China is just pure fun in 99 minutes – definitely one of Carpenter’s more accessible features.

The extra features boast a wide range of great archive footage, including featurettes, deleted scenes and trailers, as well as an alternate ending for those who like closure.

Big Trouble in Little China is out on Blu-Ray and DVD on Monday 16th December.