I didn’t catch Broadcast News on its theatrical release, but I remember noticing the movie poster, dominated by a smiling William Hurt. It was remarkably high-resolution; a very pleasant picture. I caught the movie on TV in the early 90s, and quickly secured it on VHS. Directed by James L. Brooks, who did an even better job here than with Terms of Endearment (1983), Broadcast News concerns a triangle of people who work for the same television network: Jane (Holly Hunter), Aaron (Albert Brooks) and Tom (William Hurt). The firecrackin’ Jane is a talented producer on the rise, the sharp-minded Aaron is a copy-writer and investigative reporter, and the very handsome but somewhat clueless Tom has just been hired as a new anchorman.

These three characters are absolutely amazing and absolutely real. Due to the hectic pace and loneliness of pursuing her career, Jane has regular bouts of intense crying. Aaron is her best friend, but unbeknownst to her, he is also in love with her. She, of course, falls for the good-looking Tom, who is however a below-average thinker who knows he can never keep up with Jane and Aaron’s fast-paced minds. In this way both intellect and emotions come between the three of them, making their relationship(s) tragically impossible, even though on several levels they are extremely drawn to each other.

The movie expertly demonstrates some of the reasons why people disagree and misunderstand each other due to different perspectives and outlooks, sometimes attributing ill will to each other where none exists. Politics, ignorance and different perceptions of journalistic integrity all play a part, but in this movie we are made to understand each person’s attitude and priorities in their subjective context; how they all have the best of intentions and still just can’t come to terms with each other. For instance, Aaron is a liberal who sees Tom as his natural political opposite, but Tom is just trying to desperately fit in and can’t help that he doesn’t have the same experienced grasp of ethics and integrity than Aaron and Jane have. 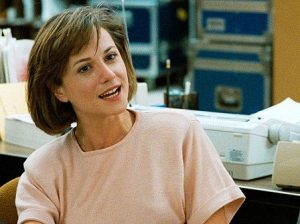 The three leads are putting in absolutely stunning performances, combining to comprise one of the hands-down most powerful dramas I know of, and most definitely a high-point of 80s cinema. One year later, in 1988, a similar movie called Switching Channels came out (starring Kathleen Turner, Burt Reynolds and Christopher Reeve), which I just watched in order to compare the two movies. And while it is effectively funny and entertaining, Switching Channels is also clearly derivative of Broadcast News and not at all in the same category.

Featurette – The story behind ROTPOTA