Calin Peter Netzer’s Romanian drama about the relationship between an ageing mother and her selfish and immature adult son won the Golden Berlin Bear and the FIPRESCI Prize at the Berlin International Film Festival 2013, and now it returns to our screens with a DVD release. This critically-acclaimed film is entitled Child’s Pose, a title which refers both to the fabric of the film and the common name of the resting pose in yoga. Semantic and cultural connotations suggest a process of healing, of resting, of reflecting. The irony is that the film demonstrates the regression and collapse of its protagonists; the child’s pose of yoga also resembles a foetal position, and the son – Barbu – does indeed regress into a naive and childish persona. The son behaves like a child at the age of 34, but when he accidentally hits and kills a child in his car it represents the ultimate loss of innocence. This tension pervades the fabric of the film, characterising the torn and conflicted consciousness of the mother figure, Cornelia.

Whilst the film centres around the actions of Barbu, one of its main preoccupations is in fact the hyper-realist exploration of a woman’s lonely consciousness as she does everything in her power to save her son from going jail. The unsteady, almost naive quality of the filming gives the film a fly-on-the-wall documentary flavour, as though events are unravelling before the viewer in real-time. The irony, however, is that this hyper-realist depiction of the relationship between mother and son leaves the complexities of the mother’s consciousness to the imagination of the audience. Rather than becoming clearer, the workings, thoughts, and processes of the mother’s mind become more and more obscure to the point at which her true feelings and intentions can no longer be identified.

This characterisation of Cornelia as a ‘mother’, a ‘sister’, a ‘wife’ epitomises her existence; she can only be defined by her relationship to others, whether by the love for her son, or the dislike for her daughter-in-law. She is both innocence and guilt, she is both protecting and exposing, forgiving and condemning, and she humours these very tensions in her son’s character, which serves only to exasperate her own.

Cornelia’s relationships with the family members in the film further expose her own insignificance. There is no soundtrack and very little communication; when there is, it only incurs miscommunication between the members of the family, or a disbelief on the part of the audience, who struggle to locate the virtue and truth in the conflicting stories told by each family member. Cornelia’s family and friends are vehicles through which her insignificance and invisibility are realised. She is rarely heard, seen, or spoken to. She is spoken across, ignored, her fears and concerns largely unrecognised.

At the same time, she is cold to the pain of the family that her son has damaged – she is sensitive only the the pain and wellbeing of her own family, isolating herself from the social sensitivities of the real world. Her self-worth is defined by the protection of her loved ones, which, in the case of this highly precarious situation, requires her to lie, manipulate, and deceive the authorities.

The over-arching question of the film is ‘where does the moral compass lie’? With the complexities of class, family life, and mother-son relationships clouding the moral vortex of this film, ‘right’ and ‘wrong’ become increasingly difficult to locate. True to its Romanian realist roots, Child’s Pose does not allow for a clear-cut black-and-white moral fabric to dictate it. The Police are willing to take architectural advice from the mother of their potential convict, the mother is willing to pay off witnesses for fabricated statements in support of her son, the family who felt victimised by the death of their young son become as much the attackers as the attacked, and this event – like a catalyst of the butterfly effect – unravels and shifts the entire system of social and moral spheres. 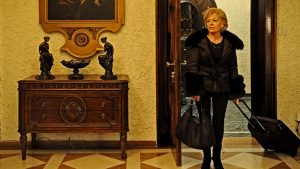 As is so typical with contemporary realist Romanian film, there is little traditional tragic structure; the entire film is a denouement, beginning with the climax, and steadily unravelling to the point of no return. Once the child is killed, this event alone appears to unleash all of life’s true vulgarity onto the fabric of the film. Some of the most banal and even repulsive aspects of human life are incorporated into Netzer’s understanding of realism, such as basic bodily functions and excretion, as the audience are somewhat reluctantly forced to witness an upper-middle class 60-year-old woman on the toilet.

Perhaps the resting quality of the Child’s Pose ultimately lies in its parallel with death. A child is killed, and when the two mothers come together to channel their respective sorrows, both parents talk about their boys as though they are dead. When Barbu kills a young child, his innocence and his identity are together lost: Cornelia uses the past tense when she describes him to the dead boy’s mother and she laments him in the same way as the other mother laments her dead son. As the film comes to an abrupt close, both pity and condemnation are felt for Cornelia, for Barbu, and for the family torn apart by the death of their son. By the end of the film morality and catharsis, so clearly felt in traditional tragedy, have become a confused and disorientating mess, and we are forced to ask ourselves: are we lamenting the death of the young boy, are we lamenting the demise of Barbu, or are we simply lamenting Cornelia’s shattered expectations of herself and her family?