Director James Wan garnered a lot of acclaim for Insidious (2010), and if anything the critical approval for The Conjuring is even greater – and deservedly so. The latter movie is expertly crafted, and tries to be scary without relying much at all on edgy gore or violence. The story is that of a haunted house, and it is quickly revealed that the problem isn’t ordinary ghosts, but, as in Insidious, demonic influence. A family with five young daughters has just moved into a relatively remote country house, which they bought at a police auction. When unexplainable things start happening in the house, the parents seek out a couple of expert demonologists, who confirm that the house is basically possessed by a witch, and also home to the spirits of the witch’s victims. As the danger grows, the entire house must be exorcised. 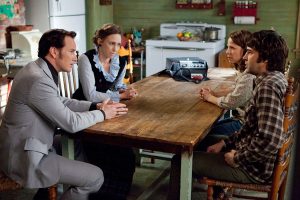 The rewarding thing about The Conjuring is that it is so well-made in terms of character and narrative flow that it acquires a true-ringing substance. This is mainly due to the highly capable performances of the actors, particularly the four adults, all of whom I would venture are at the peak of their careers hitherto. Ron Livingston (whom I know from the sadly unfinished sci-fi TV show ”Defying Gravity”) and Lili Taylor admirably embody Roger and Carolyn, whose house is possessed. Roger is a truck-driver and sometimes has to be out on long-hauls, leaving the womenfolk alone in the house for up to a week. Patrick Wilson and Vera Farmiga play Ed and Lorraine, the demonologists, and we are also made privy to their private lives; they have a daughter who is likewise pulled into the demonic proceedings. These characters are all very alive to us. 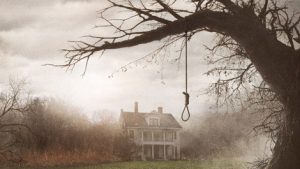 As good as the movie is, however, there is also a sense that it isn’t scary enough. It is a bit low-key, which on the one hand works well, but on the other hand somewhat fails to be turned into a strength. For instance, the evil doll on the DVD cover only has a very tiny part in the story. Compared with how much can go wrong and how vulnerable the bevy of young females are, remarkably little actually does go wrong, and if we are waiting for someone – anyone – to actually get truly hurt in some way, we end up waiting a long time for very little. But, I said ”if”, and this is an important proviso. There are horror fans who are all about waiting for the gore to break out, and then there are those who prefer that the graphic stuff takes place off-screen. The scariest thing in this movie is something unspecified that we only hear about in a flash-back. 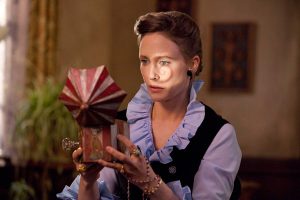 I personally do not really belong to the kind of audience who likes to cower in front of a scary movie, whether gory or not, but I think the psychology of horror is very interesting. James Wan has said that he is actually quite squeamish, and interestingly enough this is something I’ve often heard from other horror fans as well; that they are actually more thin-skinned and impressionable than a lot of non-horror fans, and this is why they get so many chills and thrills out of horror movies. I also believe it has something to do with how susceptible you are to supernatural phenomena; if you on some level believe in ghosts and demons, then of course a good supernatural horror movie will scare you. And then of course there is the question of what it can all symbolise. 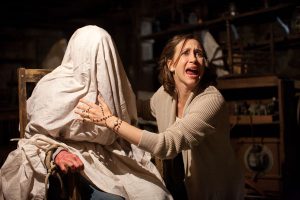 As someone who is primarily a sci-fi fan, I don’t really scare in the face of supernatural phenomena since I don’t believe in them in the slightest, and because of this I cannot suspend my disbelief. My hardened skepticism also comes through in my attitude as I watch a horror movie, and this can tend to make me dismissive of, and very desensitised to, the horrific goings-on. That is also my attitude to the claim that the story of The Conjuring is based on a true story – while something weird may have happened, I do not believe for a second that it was a genuine case of demonic possession. 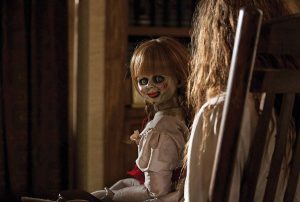 None of this changes the fact that The Conjuring is a very well-made movie, and one I enjoyed rather more than Insidious.

The Conjuring is released on DVD and Blu-ray in the UK on December 16. The DVD also has a special featurette, ”Scaring the @$*% out of you”, where the director muses about the effective scares of horror cinema in general.