When I got on the internet back in 1995, at the still-tender age of 23, one of the first things I encountered there was conspiracy theories. Being new to these ideas I was quite taken with them at first, and corresponded at length with conspiracy proponents, always ending up asking them the obvious question: if all this is true, how can our secret overlords have allowed you to find out about it? A range of excuses are given, none of them convincing. To find out what really happens in the world, your best bet is to consult radical intellectuals like Noam Chomsky (everyone really should watch the 1992 documentary Manufacturing Consent) and see what he has to say about the so-called New World Order. He gives it to you straight: there needn’t be any secret conspiracies because everything the powers that be want to accomplish is set out in fairly plain terms in the legislation that gets passed, which is all entirely above board. Of course, the politicos and their corporate collaborators don’t go out of their way to explain to ordinary people what the implications are, but that’s what makes it so brilliant: most people pay no real attention anyway. To the extent that a rich ruling class is controlling us, it takes place sufficiently subtly for most people not to care. If you are a conspiracy theorist who wants to know what is really going on, you should be smart enough to study official documents, not succumb to entertaining urban legends about secret cabals – some led by reptilian aliens – who plan to implant microchips in us all. 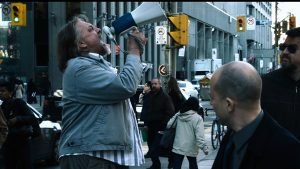 So, basically, after a brief spurt of interest and research, I quite quickly fell out of love with conspiracy theories again, back in the mid-90s. This is one of the reasons that some parts of The Conspiracy, a mockumentary about these things, were a bit dull to me. Other parts were not bad.

Ostensibly, we follow a pair of documentary film-makers who are doing a film about a particular conspiracy nut. The kind of guy who tries to call people up with a megaphone in the street. When this guys suddenly disappears, and his apartment is ransacked, the film-makers are spooked and one of them tries to dig into the big conspiracy, centering around a network of influential people called the Tarsus Club (likely a stand-in for the Freemasons), who turn out to be a 4000-year-old Mithras cult of bull worshippers. Unless of course that’s just for show. How this cult and their rituals have anything whatsoever to do with social control or world events is not touched upon, which from a narrative – and conspiratorial – stand-point is rather disappointing.

But the film has other virtues; when, a bit past the halfway-point, the story is becoming a bit stale, twists take place that keep the attention and offer a few surprises. The ending is a bit strange, and while I won’t reveal it here, I have to say it didn’t work for me. It had interesting elements, but stated in a too-overt and too moderate way, ending up comprising a flippant mixed-up blend of the actual issue and the sheer entertainment factor. 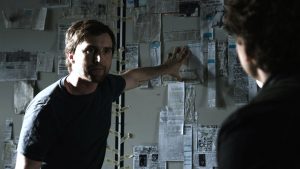 The director explains some of his intentions with the film in a 10-minute special feature interview. The film is intended to be about the community of conspiracy theorists more than about any particular theory, and I guess that explains why it doesn’t go deeply into the meaty minutiae of any one conspiracy. Both the people and the theories cursorily featured in the film are real ones, with a few ideas having been changed out with very similar fictional versions.  It seems to me, however, that the director’s heart wasn’t really into this subject matter, as he offers no kind of political edge or agenda to it at all. I think it is very difficult indeed to treat conspiracy theories in a meaningful way without harbouring some kind of ideas about what would be good for society and what would be bad for society.

The Conspiracy was released on DVD in the UK on Oct. 11.