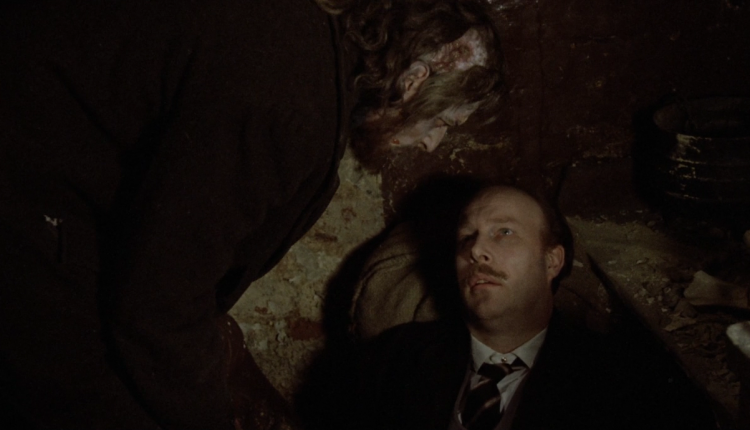 In the Victorian era, when they were excavating the early London Underground system, there was a cave in at one of the stations in the Holborn area. Unfortunately the authorities decided against searching for any surviving workers, leaving any that did to die of starvation in the warren of tunnels beneath the city. Or perhaps not. Decades later a series of mysterious late night disappearances on the underground are causing problems for the police. Problems which may have a gruesome link to the past.

Even in the light of today’s ‘anything goes’ horror cinema, where viewers think little of seeing a man split in two, disembowelled or skinned alive in graphic detail, the 1972 British shocker Death Line (aka. Raw Meat) is hard to stomach. Not because of the gruesome effects, though they are good for the period in which the film was made, and wince inducing in places: a man who gets a shovel embedded in his head stands out as a highlight, whilst the lingering shot of a rat gnawing at what’s left of the hand from another victim who’s still alive, is hard to watch. No, what makes this film so disturbing is the realism of the scenario within which everything takes place, and the fact that, unlike with so many other horror films, you feel that this – at a stretch – could happen.

The film was shot at an actual disused London underground station, lending it a credibility that a normal set wouldn’t. For anyone who’s ever stood on an empty London underground platform late at night, listening as the wind whistles along the deserted station corridors, the scenes here will be guaranteed to send chills of recognition down your spine, especially those involving the first victim, who’s disappearance sets off the horrific chain of events.

Plenty of time is spent down the tunnels with what turns out to be the ‘Man’ (Hugh Armstrong) behind the gruesome incidents, and what’s left of his victims. However equal periods unfold above ground, mainly in the offices of the investigating police inspector, Calhoun (Donald Pleasence), as he tries to get the bottom of a series of mysterious disappearances which are happening around tube stations in the area under his jurisdiction – or his ‘manor’ as he likes to put it. This, along with a young student couple, Alex and Patricia (David Ladd and Sharon Gurney) convinced they saw a victim of the ‘Man’ as they got off a tube train and whom the police have trouble believing, and Calhoun hasn’t a moment to himself.

Which might explain his character’s constant jokes, snide remarks and caustic putdowns to anyone and everyone who annoys him or gets in his way. This trait on the part of the inspector however, is the film’s biggest flaw. As in early Hollywood horrors which introduced comedic elements as safety valves to release pressure when the terrors got too much, one feels Pleasence’s humorous input, at times verging on the slapstick, is largely unnecessary, diluting the overall unpleasantness at the film’s core.

And make no mistake this film, despite its flaws, is deeply unpleasant. You’d be hard put to find a film in the history of the cinema which makes the viewer feel as uncomfortable, nauseous and simply unclean by the end. Though as the story unfolds you can’t help but have sympathy for the creature referred to as the ‘Man’, you none-the-less feel repulsed by his appearance and the lengths he goes to to satisfy his needs.

All said this is a film genuinely deserving of it cult status amongst hardcore gore fans. Those who want to join the club could do worse than to test their horror mettle by enduring this stylish slice of British Grand Guignol cinema.