by Joe Bull
in HE Reviews

Imagine a world where even the average wage-earner could afford their hearts’ content, where you could fit into a doll’s house, where insects pose a genuine threat to life. Downsizing (2017) is that place. Directed by Alexander Payne (The Descendants, 2011), Downsizing claims to be a comical, satirical look at modern life and the strain humanity puts on the world. At first glance, and even through the trailers, it appeared to be a comedy: showcasing several humorous scenes and while it does provide moments of humour, there are plenty of serious undertones throughout the film. 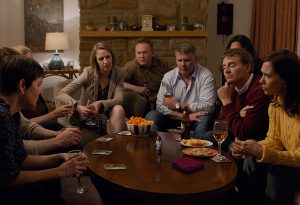 Paul Safranek (Matt Damon) wants nothing more than to make his wife happy. They embark on this epic (tiny) adventure to live a life of luxury. Things go array when Audrey Safranek (Kristin Wiig) decides she cannot go through with the operation; the sight of one shaven eye-brow, being one such humorous scene. Abandoned and alone, unable to return to normal size, Paul starts his new life. Normally, Matt Damon has such character in his performance; jjust look at him in the Bourne series or even as a lone figure, surviving on Mars in 2014’s hit The Martian. Here, however, he comes across as rather bland; his character fades into the background, surpassed by others, such as the hilariously enjoyable Dusan Mirkovic (Christoph Waltz).

Waltz steals the show in every scene and has by far the best, most memorable character: a clear contrast to the “average-guy” Damon has been given. Dusan is the neighbour from hell – until you befriend him which Safranek does, from which the film’s future plays out. 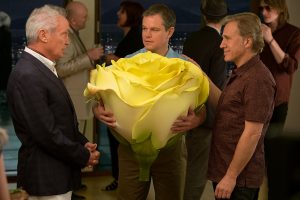 Expecting a comedy, it was a surprise to see such heavy tones throughout the film; Downsizing comments on a host of issues: exploitation of immigrants; the destruction of the world; the rescue of humanity…the list goes on and for this, Downsizing could be used in the future for studies about our interpretation of the world around us in the 2016-2018 bracket. Which is most enjoyable for those who search for hidden (and not-so hidden) meanings in films.

However, like with actually downsizing; there are a few problems: the cliched plot points of abandonment, the co-incidental introduction of characters to Safranek; they all begin to grate on you. They get in the way of the big picture and can take you away from really gelling with the ideas Payne is trying to put across. There’s also no forgetting the hugely stereotypical portrayal of a Vietnamese woman – Ngoc Lan Tran (Hong Chau) – whose overacting jarred, causing winces and cringes.

The graphics were disappointing when the downsized people were shown alongside the “normal” sized humans, it was plain to see that they weren’t really there. Unforgiving when looking at the visual wizardry that can be achieved with films such as Dr Strange (2016).

A great concept, with so much promise, that unfortunately failed to deliver; Downsizing is watchable but will leave you feeling short-changed (sorry!).