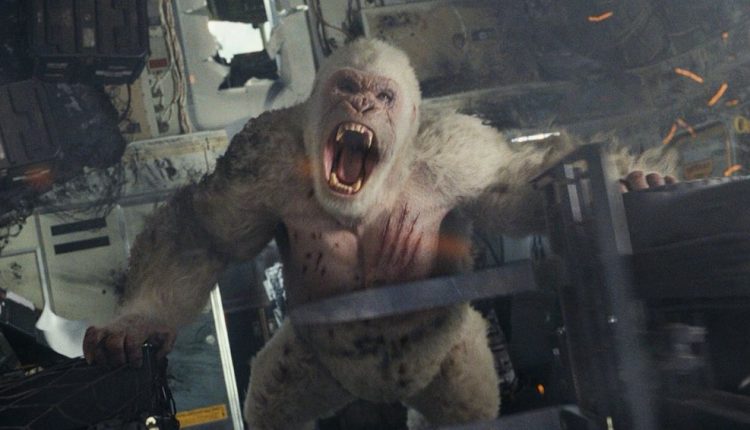 There have been a slew of films made about or inspired by computer games and sadly most have been underwhelming, often leaving the audience with a wish to restart again.  There always seems to be the same problem with these films – they only appeal to the loyal fan-base which doubly hinders: non-fans aren’t interested and the fans feel let down because the film doesn’t stick to the origin as much as they want.  So, where does that leave Rampage? 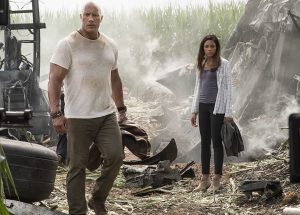 Well, thankfully it is one of the better, if not best, films based on a computer game and that is probably because the game was used as very loose inspiration.  Not only should it appeal to fans of the original games but to those who love a good old-fashioned action film which you just want to sit down and be ready to watch.  Rampagewill keep you hooked throughout its 98-minute run time with a plethora of action, comedy and Easter Eggs (check out the scene in the main office – what’s that in the back…? Or look carefully at Dwayne Johnson’s signing of himself…). And a giant Albino gorilla.

One (of many) positive things about the film is the story-line (yes, there is one) and how it links the action scenes – it gives you a sense of purpose about the film and coupled with most of the characters (we’ll come back to that shortly), Rampage is a thoroughly enjoyable – if predictable – film.  As a side-note, the opening on the space station is a nice addition, if a little too 3D.  This is another film which genuinely makes you question human nature and the ethics of everything scientists are doing.

So, those characters.  Davis (Johnson- Skyscraper), is a primatologist with a loving bond with George (a digital, albino gorilla) and this is the main focus of the film – the relationship between the two.  George is quite possibly the best thing about this film.  He brings such warmth in the opening introduction as we learn about his past and the film relies so heavily upon him for the comedy.  There were moments in the film of sheer hilarity which wasn’t expected – George’s sign language for one.  Both George and Davis bounce off of each other and the film does so well to make you invest in them.  It is refreshing to watch an action star like Johnson get to show a personal side too, even if he thinks just animals “get him”. 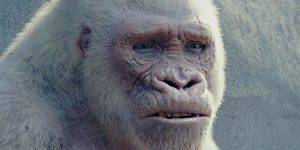 Most of the characters are played well. Most. Two, however, don’t. Both are the “villains”: Claire Wyden and Brett Wyden. They are portrayed as Scooby-Doo bad-guys with much more wooden acting. They grind harshly against the rest of the film but thankfully this doesn’t detract, merely annoy and both performances are more angry-granny-rant than a Rampage. It’s very hard not to see Jeffrey Dean Morgan as Negan these days and this is no exception – Morgan plays Harvey Russell as a more legal Negan, which is no bad thing at all, in fact, Russell provides us with a nice good/bad guy who we might not trust entirely…

There’s no getting away from the fact that Rampage relies heavily on CGI – and for the most part it holds up well: the gorilla’s hair looks so realistic that it’s unbelievable. However, about half-way through, the immersion was lost somewhat due to the obvious nature of these beasts and a few green-screen moments are reminiscent of those dodgy film-on-film car rides courtesy of Phoebe and co. in Friends.  Again, this still doesn’t hamper the enjoyment provided with the rest of the film.  The scenes of destruction in the city are hectic and full of action and could be very believable – watching the unnamed ‘Gator (in the game it was known as Lizzie) swim underwater through the river looked very realistic – if there could be such a thing!

A DVD worth purchasing?

Sure is. If you haven’t seen the film, it is worth watching and if you have…it has value in watching again – perhaps you’ll uncover some other hidden Easter Eggs. The DVD contains a short making-off feature which is worth watching as well but it doesn’t really reveal anything additional that you can’t find out online. It does, however, tell you repeatedly that Johnson loved the game back in the day!

Watch the opening scene again – how many canisters did scientist Dr. Kerry Atkins actually take and how many are left?  A possible and welcome sequel could be on the way!