It starts to become a bit depressing to kick someone so much when they’re down, but few directors have fallen so far out of favour in recent years than M. Night Shyamalan, the man who offered his services as nominal helmsman for this Smith family vanity project (Will, starring alongside his lesser-talented son, Jaden). Or the Smith Family Robinson. Either way, this movie is one that just didn’t look good from the outset. The trailer didn’t even feature any good moments, and trailers are supposed to sell movies by using the best bits (think of how many comedies that you’ve been disappointed by when – altogether now – all the best bits were in the trailer). The fact that it seemed to be a two-hander between Will and Jaden wasn’t something to look forward to. Even the promotion from big Will, AKA one of the most energetic stars and best promoters of the past decade, couldn’t raise any enthusiasm. 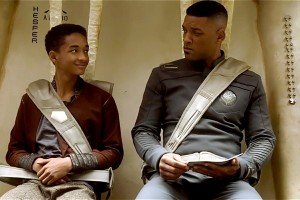 The film starts with Smith Jr. providing a lot of exposition via voiceover. I admit that alarm bells were ringing within the first minute or two of the movie. Jaden Smith is terrible in this movie, and knowing that you’re about to spend most of the film in his company fills you with dread as soon as you realise just how bad he is. But let me explain the story before I get too distracted by my many complaints. Jaden is trying to follow in the footsteps of his father, but he’s not up to par. Daddy is a soldier who can expertly ghost in the company of dangerous creatures out to get him. Ghosting is the ability to become invisible by controlling your body and losing any sense of fear. A few scenes later and father and son are the only survivors of a crash that leaves them stuck on Earth, now a planet full of dangers and inhospitable to humans. Smith The Elder has a bad injury, meaning that it’s all down to Smith The Small to trek through the dangerous environment to reach an emergency beacon that will bring essential aid to them. Can you figure out the third act? If you’ve seen a handful of movies in your life then yes, yes you can. 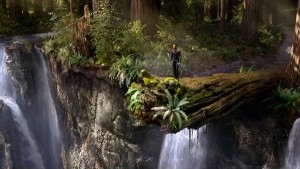 If being 100% predictable from start to finish was the worst crime that After Earth committed then it wouldn’t be almost painful to watch. As much as we complain about predictable movies, I’m happy to admit that sometimes familiarity is comforting. We all know that it can breed contempt, but that’s not always the case. Unfortunately, After Earth has much more than that working against it. I have already mentioned the terrible acting from Jaden Smith so I won’t spend more time picking on a child actor. Sadly, Will Smith isn’t doing great work here either. I can only assume that he was trying to make his son more comfortable. 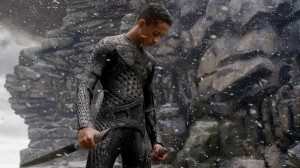 The script is horrible. It’s clumsy, it’s patronising and it throws in a number of elements that make no sense whatsoever. Developed from a story idea by Will Smith, it obviously strives to be something meaningful and grandiose. Gary Whitta and Shyamalan instead manage to highlight all of the plot holes and melodrama to make a painful sci-fi soap opera. It’s not even laughably bad, unfortunately, although it comes close: e.g. the scene in which Daddy Smith doesn’t realise that Smith Junior was scared by a big spider crawling on his hand while he climed up some rocks . . . . . . . . . . . . . . just moments after reassuring him that he would spot dangers before they ever got close to his boy and would advise him on how to act/react. 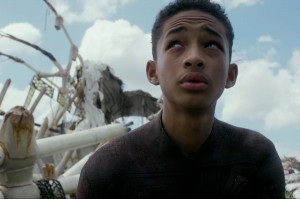 Are there any good things in the movie? A few of the special effects are good. And Glenn Morshower appears for a minute or two. That’s all I can think of.

After Earth is available to buy here in the UK from Monday 14th October. I encourage everyone to avoid buying it.