With Escape Plan, staring Sly and Arnold, being released on DVD and various streaming media, iTunes et al, it’s time to offer a home delivery appraisal of this action adventure flick. Let’s agree up front that a different standard applies. The convenience and lower cost of seeing a movie at home – unless it benefits in some significant way from the large screen (Gravity) – entitles it to an extra star or two just on principle. No dissenting voices heard; okay then, it’s unanimous. Let’s get on with it.

Sly has an interesting gig. He’s a prison security analyst. Here’s the twist: he doesn’t just observe and report. He has himself incarcerated; then he escapes. He determines the weaknesses of an institution through an obsessive process of compiling the details of prison routine, personnel behavior, and a variety of other relevant factors. Then he struts out – cool as you please – and collects a hefty fee, leaving the prison administration to adjust accordingly. 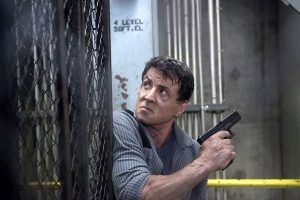 Prison break movies are fun. It’s a rich enough vein that there have been a couple of minor classics of the sub-genre but, even in the less ambitious efforts, the concept is inherently entertaining. One invariably roots for the captive. Who’s side am I supposed to be on? The cage’s? It takes daring, cunning – and exceptional puzzle solving skills to earn unauthorised early release. Social justice and the corruption of the legal system aside, most of these bad boys are just where they belong. On the other hand, I can’t help cheering for that rat to beat the maze. I’m with Shifty Henry. Bugsy can stick around while he gets his kicks, but for heaven’s sake, if no one looking let’s make our break.

Here’s something, however, to keep in mind. If the fee for an assignment is an order of magnitude greater than usual, it’s okay to get paranoid. If the CIA is involved, paranoia is mandatory. On the other hand, this is Sly we’re talking about – who cares what the character’s name is; it’s Sly. So the double cross is on. It’s a trap. So what? It’s all good. Just another day at the office.

Office? It’s immediately apparent that the interior designer here has read Sly’s book on how to avoid embarrassing disappearances on the cellblock. You know this because the warden has a copy of it on his desk. In this prison, there’s nowhere to hide and no way to run. The cellblocks walls are shatter proof transparent glass. Cameras are everywhere. Guard schedules are erratic and seemingly random. They wear masks to make it harder to keep track of them.

Soon after his arrival the warden, Jim Caviezel, pays a visit to Sly’s glass cage. Sly recites the secret code. You know, the prearranged get-out-of-jail-free card. The deal breaker is that Sly had seen a prisoner in transit with him tossed out of the helicopter for annoying his escort, just as our Houdini for hire was being injected with a dose of the stuff that makes a colonoscopy a fond memory. Sorry Sly, the warden sneers. Your shore leave privileges have been revoked. You’re here for the duration. Somebody wants you buried. And this place is affectionately called “The Tomb”. 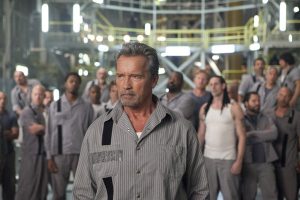 Enter Arnold. No alias required. Arnold is also undercover, for other reasons. Guess what? They team up and plan their escape. There’s a sympathetic doctor, a heroic third member of the escape team who makes the ultimate sacrifice. There are a couple of cool surprises – let’s see if you can guess where this prison is (I gave you a hint) – and a lot of action, including a prison riot. What’s a prison movie without a riot? There’s a worthy chase scene through the bowls of the prison’s interior crawlspaces and some climactic kick-ass revenge for the traitor on Sly’s team.

Sly and Arnold are a fun team and Escape Plan, given the watch-at-home bonus handicapping and snack bar discounts that come with making your own popcorn, is entertaining proof that these two senior action heroes aren’t ready to be sent out to pasture.

Escape Plan was released on DVD and Blu-ray 17th March 2014.