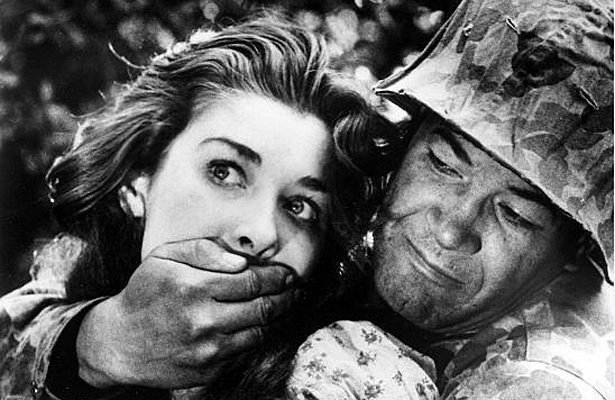 Stanley Kubrick fans, rejoice. Fear And Desire is the debut feature from the director that so many people look up to as a master of film and it’s one that has remained the least-seen of his works after a very limited release back in 1953. It has been available on DVD and online, but it’s probably not looked this good in 60 years. Of course, as you would expect, it’s not up there with Kubrick’s later works (masterpieces such as A Clockwork Orange and 2001: A Space Odyssey) but the pleasant surprise for viewers finally getting to experience this relatively short film (it runs for just over an hour) is in seeing how his interest in human nature and the madness of war is already well-formed here.

Many people have shared Kubrick’s interest in the human animal and just how man copes with the strain of war, but few have balanced the darkness of the mindset along with the absurdity of the situations. While most of his other movies have been far removed from the satirical comedy of Dr. Strangelove Or: How I Learned To Stop Worrying And Love The Bomb, there is always the feeling that the director, as cold and clinical as he seemed to be, could be looking deep into the hearts and minds of his characters and having a sly grin at their expense.

Fear And Desire may be his most humourless film, a simple exercise in showing war and what it can take to survive it. The movie could easily be an episode of The Twilight Zone, though without any twist; it begins with a voiceover telling us that the men onscreen are, basically, everymen from anytime fighting in any non-specific war. These men are played by Frank Silvera, Kenneth Harp, Paul Mazursky and Stephen Coit and are stuck behind enemy lines after crashing a plane. What will it take to get to safety and will they make it?

The performances from this cast isn’t bad, especially considering how they’re all left with very little to work with other than the dialogue and tensions between one another. Despite only naming the four actors, a few other characters do appear and Virginia Leith stands out with her silent performance as The Girl. The audio and visual quality is very good for a debut feature although there are a number of times when you wonder if the whole thing could have just as easily embraced any technical limitations as a coating of surrealism to add to the already strange set-up.

[Fear and Desire] is a crude sketch, a primal shout out from someone still finding their own voice

Written by Howard Sackler, there’s more than a hint of the stage play about this and the amateur nature of many of the scenes work against the simple, stark imagery and decent performances. Fans may be unhappy to hear that Kubrick himself disliked the movie, but knowing how his career would develop and how he would always strive for perfection, that’s not very surprising. This film is a crude sketch, a primal shout out from someone still finding their own voice, but it still has just enough intelligence and professionalism to work. It’s worth seeing and it’s very interesting to watch while thinking of what heights the director would reach, but it’s far from unmissable in terms of cinematic achievements. In terms of those who have watched and rewatched most of Kubrick’s filmography, however, that’s a different matter entirely.

Fear And Desire‘s restoration work by The Library Of Congress is as good as you would expect: there are three documentary shorts, also by Kubrick, presented for the first time on an official release (Day Of The Fight, Flying Padre & The Seafarers). Bill Krohn introduces the material in a new and exclusive video introduction and a packed booklet features new and exclusive essays on the films featured by James Naremore. Overall, this is like a few Christmases rolled into one for Kubrick fans.