The arms-deal-gone-wrong is chock full of characters heavily armed with fragile egos and bravado: Cillian Murphy’s buyer Chris has the independence of the Irish as his motivation, whilst arms dealer Vern (Sharlto Copley) sees gun sales as his route to Saville Row suits. Hackles are raised and backs are up when the liability that is Stevo (a show-stealing Sam Riley) gets outed for hospitalising a family member of seller Harry (Edgar Wright lookalike Jack Reynor). Before long, bullets fly, King Collars are cremated and bell-bottoms are blood-stained.

The earlier Reservoir Dogs reference isn’t that far from the mark: imagine the Mexican stand-off that took down Mr White, Mr Orange, Nice Guy Eddie et al only resulted in mere flesh wounds and instead of the credits rolling, they all took cover and took pot shots at each other. Sounds fun, right? And for a while it is.. 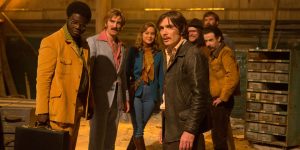 Being played for laughs, it’s got more in common with a stag do paintballing sesh than a life or death scenario. Bullets go straight through, miss vital organs or shred shoulder pads. The trouble is that this happens with such regularity that any sense of danger is removed: characters stick their heads out to talk smack and act surprised or insulted when they’re actually hit. It’s not until the final act that shit gets real and, perversely, the viewer gets treated to some satisfying character culling.

However, the performances more than make up for this. Within the first twenty minutes, we have a host of characters that are relatable and hateable in equal measure. Armie Hammer’s all suave, Wheatley fave Michael Smiley brings the Irish charm, whilst Murphy and Noah Taylor convincingly play it straight. It’s only Brie Larson’s Justine, the lone female who’s left with very little to do. 1970’s social commentary? Maybe.

It’s unfortunate but perhaps poignant that a film heralded as adrenaline-fuelled and explosive spends so much time with the characters crawling. Metaphor? Maybe.

Free Fire certainly hits the target, but sadly it’s not a bullseye.

Free Fire is available now on DVD and Blu-Ray.

Disc extras include an audio commentary with Ben Wheatley, Cillian Murphy and Jack Reynor, a ‘making of’ featurette and interviews with the cast and crew.