The first annoying thing about Fright Night 2: New Blood is that when describing it to other people you have to mention the following. This is not a sequel to Fright Night (2011), nor is it a remake of Fright Night Part 2 from 1988, which followed on from the original Fright Night (1985), of course. No, this is a movie that simply uses the characters already established in all of those movies to give viewers an all-new vampire adventure. All-new, but also dull and, yes, quite toothless. 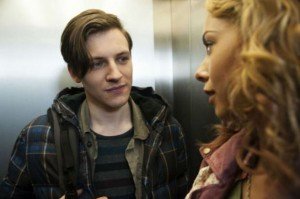 Will Payne plays Charley Brewster this time around, a young man who has journeyed abroad to Romania to study, alongside his friend ‘Evil’ Ed (Chris Waller) and his recent ex-girlfriend, Amy (Sacha Parkinson). Unfortunately for Charley, one of his professors (Geri Dandridge, played by Jaime Murray) is a vampire. Of course, nobody believes Charley when he tries to reveal the truth, but it’s only a matter of time until Geri finds him more than just an amusing irritant and decides to get rid of him. Perhaps Peter Vincent (Sean Power) can be of some assistance. After all, he investigates the supernatural on his TV show and isn’t afraid to go where evil may lurk. Right? 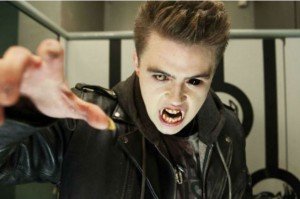 It’s a shame that this is as bad as it is, because there are one or two ideas in the mix that would work if surrounded by a decent movie. Jaime Murray is very good as Geri Dandridge, strong and sexy and happy to toy with her victims while confident in her powers. Sean Power may not be great as Peter Vincent, but the way his character has been adapted is fantastic. Making him a TV presenter involved in a “Most Haunted” type of TV show is the best decision made in Matt Venne’s script, but it’s then squandered as the character is given very little screentime and even less development. 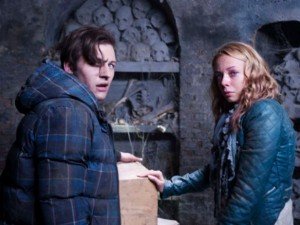 Those are the good points anyway. Okay, some gratuitous nudity and a couple of decent gore moments will please the easily pleased (and I consider myself in that category), but that is all the movie has in its favour. As for the rest of the cast, Payne, Waller and Parkinson are just far too bland. They’re not helped by the script, which is insultingly lazy. No characters are given any decent development, perhaps because viewers already know their backgrounds (except, as this is a new take on the material, we don’t), and the leads are saddled with some of the most insubstantial, incomplete personalities I can think of in recent years. Seriously, I’m amazed that Venne remembered to give them names.

Director Eduardo Rodriguez doesn’t do anything to make things better, but he doesn’t make things worse either. He may show a lack of imagination, but perhaps that was something that would always happen with such a lacklustre attempt to cash in on a familiar name. At no point does the movie feel like anything more than a cynical, lazy, branded product. 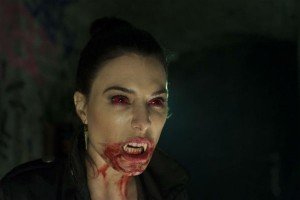 Fright Night 2: New Blood hit standard formats here in the UK on October 21st. I recommend giving it a miss. Or just a rental, if you’re curious.