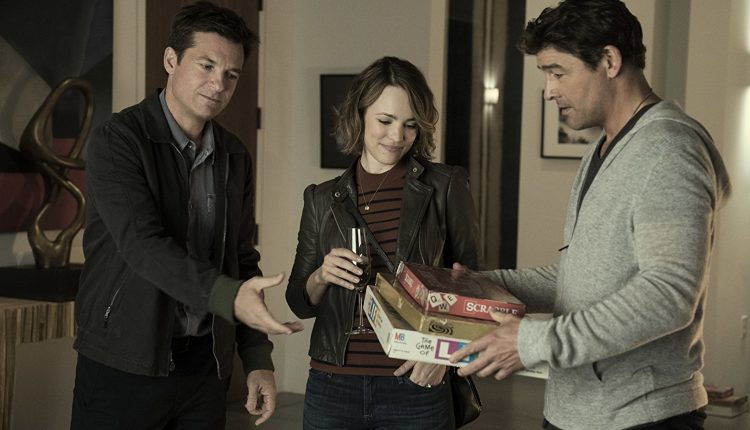 Who's up for a competition?

As you get older, staying in becomes the new going out.  The once craving for clubbing and drinking gets replaced  by the sensible yearning for staying in and playing board games. Nothing beats a game of Saturday Scrabble, that’s for sure.  Where’s this going, I hear you ask?  Well, it links quite nicely with this review of Game Night. The film stars Jason Bateman (Arrested Development, Hancock) as Max and Rachel McAdams (The Notebook, Mean Girls) as Annie, an uber-competitive husband and wife team who love games — the opening montage includes their wedding where they had a DDR machine.  They host a weekly couples game night with the usual offerings, including charades.

Things get kicked up a notch when Max’s charismatic, awesome, successful brother, Brooks (Kyle Chandler), arranges a murder mystery party complete with fake thugs, faux federal agents and clues.  So, that game night, when Brooks gets kidnapped (following a hilarious fight scene to boot), the couples think it’s all part of the game.  As the night progresses, the six gamers discover that neither this game or Brooks are what they seem to be.

The entire night is filled with chaos, comedy and charisma.  The friends find themselves increasingly in over their heads as twist after twist leads to another unexpected turn.  They — and the audience — have no idea where things are going.

Humour is abundant throughout the film. One scene featuring Max and Annie gagging is most certainly laugh out loud; there are some amazing film and game references (the Pulp Fiction one stands out in particular) which will be picked up upon by film fans. The way the characters play off of each other feels like the real deal; you genuinely believe these have been life long friends (including the creepy cop next door) who simply love to compete.  There’s just so many jokes and funny moments, it would spoil the film to list any more.

The crux of the film is the relationship between brothers, built-up perfectly before we even meet Brooks.  Immediately we begin to dislike the guy: first impressions are of a smug, show-off who never misses a chance to put his brother down: the classic story of a bungee rope use inspired by an old Marilyn Manson reference reveals Brooks has no limits.  Over the film, we get to learn all about Brooks and his character is really well-developed and a great moral for some people…

The amount of action and development should keep the audience hooked throughout. Some elements, like the mansion scene towards the end test the limits of believability of the audience, but you just don’t care. The film is simply that entertaining.

Interestingly, the choice of using a tilt-shift lens gave the film a distinct “Game of Life” look, most used in PC games such as Cities: Skylines.  It would be personal taste if this look puts the audience off but being in so few scenes it wouldn’t matter even if you didn’t like the style.  While on the subject (sort of), the soundtrack is great. Two Queen songs make their way into the film and are appreciated for their up-beat nature.

While there are so many twists at the end, the final piece seems a bit obvious. There will be no surprises regarding the final outcome, but sometimes it is not about the destination: it’s about the journey.  You don’t play Monopoly without really knowing the outcome I guess — someone’s gotta win!  The closing scene (almost a post-credit sequence) is very entertaining too and well worth a watch.

A brilliant comedy, Game Night should make it’s way into your DVD player as soon as possible. It is well worth spending the Saturday night in and heck, maybe it’ll inspire your own game-nights: the murder mystery one does sound pretty interesting…

The DVD reviewed contains a bonus feature: the Making of Game Night.

Game Night is out on DVD now.