I like Corbin Bernsen. Why? Simply for the fact that he starred as a killer dentist in two very enjoyable movies from director Brian Yuzna. That’s all it takes for me to like someone, sometimes. So when I saw that Bernsen directed this movie, that he’d co-written the script with Michael Winnick and that he had a starring role I wasn’t too alarmed. There were two ways this could go. I’d either enjoy the film, and Bernsen in it, or it would quickly reveal itself to be a horrible, messy, vanity project. Thankfully, it turned out to be the former. Mind you, everyone knows how easily pleased I am. 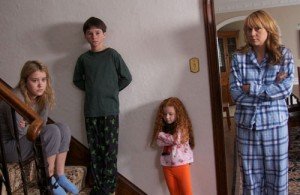 George Newbern plays Martin Taylor, the typical bad dad of modern cinema. What makes him so bad? Well, he’s been so busy working hard to provide for his family over the years that he’s missed out on a number of developments. His wife (Megyn Price) still loves him, but she doesn’t feel that he actually listens to anything being said. His teenage daughter (Taylor Spreitler) is going through standard teenage daughter stuff. His youngest daughter (Francesca Capaldi) spends far too much time relaying messages through a doll named Tina that she’s grown too attached to, and his son (Aidan Potter) spends most of his time in his room, making money with the help of technology that he’s so handy with. After another pep talk from his slightly bonkers brother, Sam (Kevin Crowley), Martin decides that he wants to save his family and himself. He asks them to join him in his scheme – three days alone in their home. No technology, no phones, no gas or electric, no running water. Nothing except each other. A TV news crew stop by, and it’s not long until tempers are frayed and the family reach a critical point.

The fact that I enjoyed Home & Alone For Christmas shouldn’t have you thinking that it’s something you should prioritise on your list of potential viewings. The film is almost completely predictable, sometimes annoyingly preachy and never seems to be anything other than a TV movie. 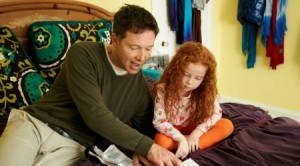 Newbern and Price are both okay in their roles, despite the ridiculous ways in which their characters behave (there’s not much logic provided to show just why Mrs. Taylor ends up going along with her husband’s plan). Spreitler, Capaldi and Potter are pretty poor, with young Capaldi being the best of the three, but they’re stuck with some horrible material to work with so I won’t be too hard on them. Crowley seems to be having fun, as does Bernsen (unsurprisingly).

The script and direction are both completely pedestrian, yet I couldn’t bring myself to hate it. Maybe that’s because it was just so bland, or maybe it was almost passable in a daytime telly way – you know what I mean, some horrible soap opera or sitcom comes on that you’d never watch at any other time, but you’re on the sofa and comfortable and the remote control is just a few inches too far away from your fingertips and, what the hell, whatever you’re watching is suddenly not THAT bad. Which probably says a lot more about me than this movie.