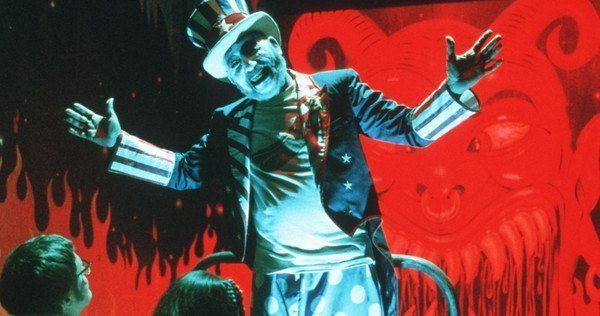 A valiant effort from first time director Rob Zombie, House of 1000 Corpses does not quite hit its mark but gets close enough to keep us wanting more.

It’s October 30, 1977 and a group of teenagers are traveling cross country to write a book about offbeat roadside attractions. On their journey they stop at Capt. Spaulding’s Museum of Monsters and Madmen. During the museum’s Murder Ride the travelers learn of Dr. Satan, a local legend who was hanged for performing torturous experiments on patients at the local asylum. Jerry Goldsmith (Chris Hardwick) and Bill Hudley (Rainn Wilson) are excited by the legend, but there girlfriends, Denise Willis (Erin Daniels) and Mary Knowles (Jennifer Jostyn), could care less and want to go on down the road. As you may have guessed, we soon learn Jerry and Bill should have headed the advice of their girlfriends.

After convincing Capt. Spaulding to give them directions to the tree where Dr. Satan had been hung, they head out into the rainy night. Along the way, they pick up Baby (Sheri Moon Zombie) who is standing on the side of the road. After they get a flat tire, Baby takes Bill up to her house and sends her brother, Rufus (Robert Allen Mukes), to retrieve the car and remaining passengers. Once at the Firefly family’s house, things take a turn for the worse, think Texas Chainsaw Massacre (1974). Will the traveling teens meet death, or worse, Dr. Satan?

House of 1000 Corpses has been criticized for being too similar to The Texas Chainsaw Massacre, however, Rob Zombie adds his own touch to this genre of splatter films. The character of Capt. Spaulding and the Firefly family are well written and entertaining. Sid Haig, who appeared in many exploitation films and a few horror films in the 1970’s (several of which were directed by Jack Hill) gives a dynamite performance as Capt. Spaulding, the lovable asshole adorned with clown paint and costume. Sid’s approach to the character is equally comedic and disturbing.

The Firefly family is a group of misfits who seem hellbent on torture and death with no rhyme or reason. The acting head of the family, Otis Driftwood (Bill Moseley), is a Charles Manson-esque psychopath who spouts intellectual sounding nonsense to his victims before torturing them to death. There’s even a touch of Hannibal Lecter to Otis. Bill Moseley, who is best known by horror fans as Bo ‘Chop Top’ Sawyer in The Texas Chainsaw Massacre 2 (1986), brings a truly disturbing dynamic to Otis, which has not been surpassed in recent years. This dynamic goes even further in The Devil’s Rejects (2005). I must admit I was pleasantly surprised by Baby Firefly (Sheri Moon Zombie). I was skeptical as to the acting ability of Mrs. Zombie, and feared her inclusion in the film might be solely for eye candy. I am happy to say I was mistaken. Sheri showed that, at least when it comes to horror, she has the acting chops to keep up with the best of them. Baby’s disturbing laugh will remain one of the most easily identifiable character traits in horror for years to come.

The film does not focus as much on the rest of the Firefly family, but each character is entertaining and adds to the story. There’s Mother Firefly (Karen Black), who is past her prime, but still tries to work her coy charms on the visitors. There’s Grandpa Hugo Firefly (Dennis Fimple), who has a bad attitude, and performs stand-up comedy after dinner. And lastly, there is Tiny Firefly (Matthew McGrory), who is anything but tiny. Over seven foot tall, Tiny wears a leather mask to cover his face, which was burned as a result of his lunatic father who set the house on fire with the family inside.

The visuals are one of the film’s stronger points. Zombie knows how to make a scene look good and bring a creepy atmosphere to life with a combination of cinematic technique, costuming, and production design. We see this right away with Capt. Spaulding’s commercial and the opening credits sequence. Zombie even uses split screen successfully in several scenes, I never felt taken out of the film by the process, which can easily happen if a horror film focuses too much on cinematic techniques.

I have mixed feelings about the soundtrack. I enjoyed the scenes where Zombie used old ‘happy’ songs to contrast the horrible violence happening on screen. A great example of this can be seen when the local law enforcement (well acted by Tom Towles and Walton Goggins) come to the Firefly’s house and find more than they bargained for to the sound of Slim Whitman performing I Remember You. Rob Zombie, with the assistance of Scott Humphrey, wrote and performed the score, which brought a creepy industrial feel to the film. Zombie also wrote several songs which appear in the film. However, since the story takes place in 1977, I felt the industrial score, and Rob Zombie’s songs,  took me out of the time period. Apparently Rob Zombie felt the same way, because he remedied the situation in The Devil’s Rejects by sticking to songs from the time period.

Rob Zombie uses more than music to create a contrast to the violence, he also uses comedy. There is nearly an equal amount of comedy and violence in House of 1000 Corpses. I find this dynamic, when done correctly as it is here, can add to a horror film, however, when poorly executed, it can make a film unbalanced, or ruin it entirely.

What holds this film back the most is the poorly written teenage characters. Granted there is not a lot you can do with characters like these, but considering how much thought went into the rest of the film, I expected more out of Zombie’s writing of these characters. Jerry is a wise-cracking douche bag who keeps getting the group in trouble, Bill is the levelheaded one, but apart from that, there is nothing which stands out about these characters. They are nothing more than victims waiting to push the plot forward. Worse than the characters of Jerry and Bill are Denise and Mary, they are both rude and bitching nonstop, especially Mary. After about 30 minutes, I was hoping they would both die a horrible death. Although House of 1000 Corpses was doomed to be compared to Texas Chainsaw Massacre, I think it would have received better reviews if more time had gone into the writing of the teenagers. Once again, Rob Zombie corrected this problem with The Devil’s Rejects. I cared about the victims in that film.

Apart from a lack of deleted/extended scenes, and a few lame extras, the special features on this DVD are entertaining and educational. I was especially impressed with the DVD menus. I wish more studios, directors, cast and crew members would put this kind of time and effort into the production of their DVD’s