by Joe Bull
in HE Reviews

Warning: this Blu-ray review may contain spoilers for Jigsaw.

One of the highest grossing Horror franchises of all time is back, taking the Jigsaw killer’s signature brand of twisted scenarios to the next level.  Claiming to be fresh for new faces, yet still resemble the old Saw movies for returning fans, Jigsaw has a lot to live up to.  So does it?

On the whole, they manage a good film.  The “victims” play their parts well and we learn their sins over the course of the film.  Each victim’s back story establishes and allows the audience to consider the merits of each’s inclusion.  Focusing mainly on three victims, Anna (Laura Vandervoort), Ryan (Paul Braunstein) and Mitch (Mandela Van Peebles), Jigsaw needed a strong and diverse cast which is well-met.  Braunstein manages some slick moments of comedy and Vandervoort stands out with her performance.  The remaining cast play their parts well and the inclusion of Kramer (Tobin Bell) is a nice touch, if a little confusing- isn’t he meant to be dead? 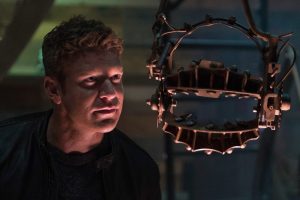 The plot plays out as to be expected- all is not as it seems and there are some references and foreshadowing early on to the avid watcher.  Yet, some of the twists come across as unnecessarily confusing with moments of perplexity.  A prime example of this happens when the focus switches between the game and the investigation, seemlingly at random.

So does it succeed?  As a “reinvention” of Saw, to a degree it does.  Leaving many franchise fans feeling let down, will any new fans stick around for the next inevitable chapter?  Jigsaw  might be not be what old fans wanted, but it offers a fresh perspective for the franchise.

Time to play a new game…

Suitably engaging, the extras are a worthy addition to the 1-disc version reviewed.  To begin with,  “I Speak for the Dead: The Legacy of Saw” is both informative and entertaining.  Throughout, it provides a good insight into the rationale of creating this film.  Many of the interviews explain choices in the film, such as the use of less gore.  Revealed in the first section, the directors wanted to have the “essence” of the first Saw film- utilising shock and jumps as opposed to constant gore.  The inclusion of these interviews makes Jigsaw a more understanding film to watch.  It helps to develop an understanding of certain decisions and where it fits into the Saw franchise.

Also included is the audio commentary with Mark Burg, Oren Koules and Peter Block (producers) which provides interesting insights as the film plays out from people who are clearly fans of the films.

The final inclusion, “The Choice is Yours: Exploring the Props” delivers a look at all the devices used; the torture room and aspects of how they were made.