Spun-off from the hit Danish TV show (often compared to HBO’s Curb Your Enthusiasm), Mikkel Nørgaard’s Klown takes social-realist cringe comedy to all-new depraved depths, its approach to observed realism not so much foot-in-mouth as deep-throating-the-leg.

Frank (Frank Hvam) is the 40-year-old man-child who makes the heroes of Judd Apatow comedies look like the cast of Frasier, and when he learns that his girlfriend (Mia Lyhne) doesn’t think he has Dad potential – tricky, as she’s just revealed her pregnancy – he sets out on a mission to prove his worth. Unfortunately this involves kidnapping her 12-year-old nephew Bo (Marcuz Jess Petersen) and forcing him to tag along on a canoe trip with his best friend Casper (Casper Christensen), a trip nicknamed “Tour de Pussy”. 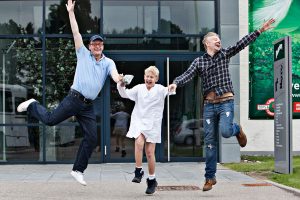 In a traditional Hollywood narrative (The Hangover‘s Todd Phillips is directing a remake) Bo would be the catalyst for Frank’s change, and though Klown does follow basically the same arc, it refuses sentiment and dedicates fully to the Theatre Of Cruelty style comedy usually diffused by saccharine third-act conformism (to marriage, education, a job etc), suggesting instead that you can take the boy out of the man, but if that man is still an asshole the cycle will remain unchanged. 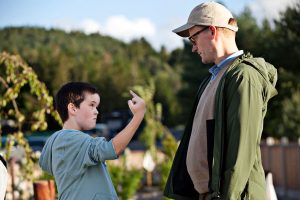 The screenplay (co-written by Hvam and Christensen) avoids the clichés of many TV-to-film adaptations by basically copy-and-pasting the skit template of the show onto the big screen, albeit within a fairly typical let’s-go-on-holiday narrative (familiar from the heinous gallery of British sitcom adaptations, from Mr. Bean’s Holiday to The Inbetweeners Movie), subverted by its relentlessly unflattering portrayal of the countryside, and a rejection of the usual sightseeing montages and contemporary pop cues which attempt to divorce the characters from the small screen.

It’s finally quite wearing, as several set-pieces skew so close to the bone that you’ll want to get up and leave (fine in twenty-minute chunks of TV; punishing in a ninety-minute movie), but it works because of their consistent hilarity, and a smart structure which increases the intensity of the gags in tiny increments, building to a knuckle-gnawingly embarrassing finale which, if it signals the end of Klown, whose sixth season seems to have been its last, couldn’t be more perfect.

The DVD comes with no supplemental features, but offers a clean presentation of the film.