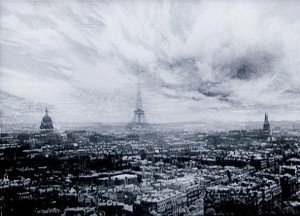 Written and directed by Chris Marker, La Jetee is far from your traditional style of film. It is, as credited onscreen, a photonovel. A series of photographs are used to accompany a story told to us by an offscreen narrator, allowing for an experience quite poetic and memorable.

The story is all about a man (Davos Hanich) who keeps thinking back to a particular childhood memory. This strength of imagination and memory (for aren’t the two things essentially linked?) leads to him being picked as an experimental subject in time travel. The world has been destroyed by a third world war but the people in control think that it will be possible to help the present situation with resources from the past. The man takes time to adjust, it is like being reborn as an adult into a different time, and eventually meets up with a woman (Helene Chatelain) who he recalls from his childhood memory. The more times he visits the past the more he enjoys his time with the woman but he knows that he will have to keep returning to the present.

A strange mix of darkness and light, La Jetee may be best known to film fans nowadays as the film that was developed into 12 Monkeys. Both films take the concept and make a major impact with it, though 12 Monkeys wins out for me as it has the luxury of a feature-length runtime (while La Jetee is just under 30 minutes) and some great camerawork.

The narration for La Jetee is simple and to the point, explaining the situation and also describing emotions in an effectively unemotional manner. It’s the way that the narration is juxtaposed with each photograph that gives the movie such a surprisingly effective profundity.

There is also some eerie audio used to represent those conducting the experiment and one piece of moving film that stands out as something a little bit startling due to the static nature of every other image.
Well worth seeing, La Jetee is as smart, moving and influential today as it was when it was first released back in 1962. 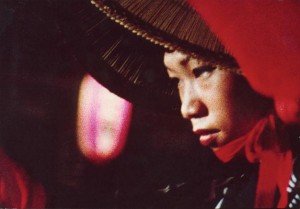 Another movie written and directed by Chris Marker, Sans Soleil is yet another film that’s a break from the norm.

Closest to the Qatsi films in the experience that the viewer gets, Sans Soleil is an insightful travelogue in some ways while also including a look at aspects of human nature and also some thoughts on the substance and power of memories, imagination and time (with footage from Vertigo used to accompany some of these ruminations). Some of the moments captured onscreen are mundane and ordinary but every image somehow captivates, whether it’s people praying for their cat or a shrine to damaged dolls or even just a sitting woman who studiously avoids the gaze of the camera until she gives one, fleeting glance.

The imagery is accompanied by narration from a woman who is reading letters sent by Sandor Krasna. Is Krasna a real figure who wrote these letters or simply a name used to voice Chris Marker’s views, I suspect the latter but cannot say for certain. What I do know is that the man is a traveller and always has a camera to hand. Japan, Guinea-Bissau, Iceland and San Francisco are the main places shown, all commented on and full of imagery expertly edited together to make one fantastic visual painting of modern life.

There’s not a lot to say about the movie beyond that. No plot (although it does have a definite structure), no actors (except in those excerpts from Vertigo) and nothing comparable to anything usually seen in cinema. Which is really the most important point to make.

It’s a fantastic experience, interesting and visually impressive, that I’d like to write more and more praise about but words somehow seem inadequate.

A double-feature of La Jetee & Sans Soleil will be released here in the UK on Monday 22nd August and is well worth taking the time to see. Level Five is also released on this day and I’m sure that many Chris Marker fans will take the chance to finally purchase this 1997 feature.