Le Week-End follows a married couple who are rapidly approaching retirement age as they embark on a trip to Paris where they hope to rekindle the magic in their troubled marriage. Nick (Jim Broadbent) and Meg (Lindsay Duncan) are not your regular starry-eyed lovers however; beneath the surface of their troubled relationship are a number of deep-lying resentments and a wealth of past regrets.

Nick, a Philosophy professor at a little known University, clearly longs for what could have been and sees his life as a series of disappointments. In one telling line he glumly muses “I never thought that I’d turn out so mediocre.” It emerges that he has been forced into early retirement after making an inappropriate comment to one of his students meaning he now no longer even has his career to cling onto. Meg meanwhile longs for more. An elder woman who has maintained her allure, it’s clear from the off she is unhappy with her lot in life, fearing it lacks spontaneity and a sense of adventure. Nick has nothing else left but Meg, Meg can’t stand to have Nick under her feet. Something has to give sooner or later. 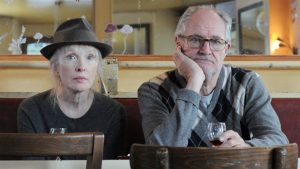 Paris is that most romantic of cinematic cities. It’s the city of moonlit walks along the Seine and candle-lit dinners in front of an inexplicably visible Eiffel Tower. Here however, other than a momentary glimpse of the famous tower, Paris is just another source of frustration and disagreement as the couple stumble from one argument to the next.

Broadbent and Duncan are both impressive in their respective roles. Broadbent nails the quiet desperation and melancholic air of Nick with one particularly forlorn moment seeing him chugging expensive mini-bar spirits as he wistfully sings along to Bob Dylan’s ‘Like a Rolling Stone’ on his Ipod, the moment filled with nostalgia and misty-eyed regret. Duncan’s Meg meanwhile yearns for something Nick cannot offer and is prone to angry outbursts when she feels he has once again disappointed her.

Both actors are playing roles one doesn’t see all that often in cinema, the ageing couple in crisis, as well as handling material concerning a particularly taboo topic, the sex lives of the elderly. They aren’t a typical sugary sweet romantic couple with delightfully quirky problems; they are frustrated and flawed individuals who are struggling to come to terms with their predicament. 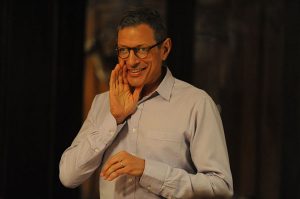 Equally solid is Jeff Goldblum who turns up midway through the film as Morgan, a former University acquaintance of Nick who has gone on to become a successful academic personality. Goldblum’s Morgan is a suave and confident character who provides the perfect counterpoint to Nick’s timid sadness. A climactic sequence, frequently very difficult to watch, plays out at a dinner party hosted by Morgan in his fancy Paris flat. Amidst the elegance and finery that they never got to experience, Nick and Meg have big decisions to make. All three actors are able to showcase their abilities perfectly in these scenes as some deeply repressed emotions come bubbling to the surface.

That being said, as solid as the three leads are, Le Week-End ultimately still fails to fully ignite. Where you might expect a film such as this to contain the ups and downs of a couple striving and struggling to rekindle their love, it is instead an unremittingly downbeat film punctuated with only the rarest moments of humour. The characters, while well-acted, were for me not especially likeable and I struggled to truly care what became of them by the end of their Parisian ordeal.  One obvious comparison is with Richard Linklater’s Before Midnight, another story about a marriage left on shaky ground after the spark of love has dwindled. However whereas in Linklater’s film the leads were allowed to be entertaining and charming, here Broadbent and Duncan are consigned to being dull and gloomy. As truthful and honest as their performances may be, it just does not make for very entertaining viewing.

That being said however, Le Week-End is by no means a bad film, there’s plenty in there to admire. Director Roger Michell has created an intriguing portrait of a marriage in crisis and the reality of a life lived with regret and lost dreams. It strikes me as a film that will divide opinion and resonate far stronger with some than others. It’s worth giving it a chance, but don’t expect an especially easy watch. 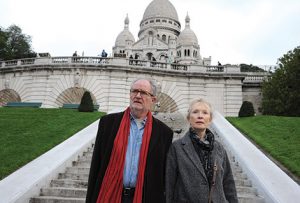