Les Invisibles is a documentary by Sébastien Lifshitz (21 January 1968), a French screenwriter and director whose work tends to involve gay themes. Since his first (short) film ‘Il faut que je l’aime’ (1996), this is his eighth film production, this year followed by the release of the documentary ‘Bambi’.

In an interview with the director on the DVD-release on 27 February 2012 of ‘Wild Side’ – his 2004 French, British and Belgian award-winning co-production – Sébastien Lifshitz said: “I guess I’m not too interested in fictional characters. A role is simply a pretext for me to convince people to join in the adventure of one of my films. For me, the real subject of the film is my attempt to make documentary-like portraits of people who moved me when we met. If they decide to accept my offer, some passionate moment could follow. It’s a real tender and emotional human adventure!” This certainly holds true for his intimate and at times moving portrait of the lives of 11 elderly French gay men and women, all born between WWI and WWII, who all share similar and sometimes fearful experiences on their journey of self-discovery and in the way they have had to deal with a society which was not always a very understanding and tolerant one. They are interviewed by Lifshitz who remains unseen and unheard during the film and in doing so shows admirable respect for his actors. He has clearly managed to put his interviewees fully at ease and happy to share with the viewers their vivid recollections about their childhood and their first sexual experiences. The testimonies are powerful and human and we are given an insight in moments of darkness and pain but equally of joy and happiness. The almost unifying theme in all of the stories presented to us is a complete absence of victimhood with the interviewees: there is no finger pointing and no accusations are made to a society in which all of them – each in her or his own way – suffered the effects of ignorance, homophobia and aggression, one way or the other. We are painfully reminded of the harsh reality of the attitude towards homosexuality in the sixties and seventies through archive footage: a publication in the Paris Match in 1979 on ‘Le Phenomene Homo’ (the phenomenon of homosexuality), reporting on ‘le jour comme la nuit ils ne se cachent plus’ (day and night, they are no longer hiding) leaves little room for guessing what the tenor of the article is about. The derogatory comments of a British TV reporter on a brief clip of what looks to be a gay club in the sixties could not be more un-PC. 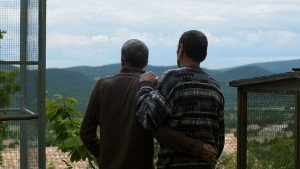 This is however not a story about people who fought hard battles for acceptance or had to adopt a militant attitude towards the society they lived in, nor is it the story of those who had the luck of living in a more tolerant society which Paris would have been at the time when they searched for their identity. This documentary focuses on people in France’s provincial towns and the countryside who would rarely be the subject matter of the, dare I say, beauty and youth obsessed gay cinema of today, the invisibles if you like. Their ‘revolution’ and quest is almost the personal struggle they fought with themselves in their search of who they really are, a struggle which was sometimes fought later on in their lives and in some cases leaving behind a husband or wife and children. Particularly touching is the story of Thérèse, a wife and devoted mother of four, who got involved in the feminist and gay rights movement in 1968 Paris where she discovered her true sexual identity. We are witness to an intimate family dinner with some of her grown up children, fondly reminiscing a tumultuous but happy past. How ironic also to see how a lesbian couple who were forced out of their jobs in Paris and escaped to the countryside to begin a new life in farming, received all the support from the local farming community which couldn’t care less about their private life. 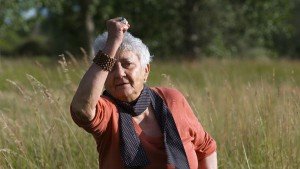 The cinematography by Antoine Parouty, particularly of the rich pastoral landscapes, is truly stunning and combined with some very elegant musical interludes (Chopin, Jocelyn Pook and Vivaldi) leaves the viewer with a sense of peace and joy but also. The music at the end during the credits – Juliette Greco’s ‘Le monsieur et le jeune homme’ couldn’t have been better chosen. 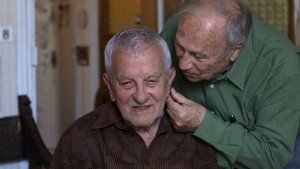 The recent resurgence of ignorant and homophobic attitudes towards gay and lesbian people in Russia shows how important it is that films like these are made. If I had to place one critical note however it would be that the length of the film negatively impacts its pacing. Having said that though I would not want to see any of these highly personal and vivid testimonies cut back for the mere sake of bringing the film back to a more conventional length.