Robert Altman’s controversial adaptation of Raymond Chandler’s novel gave birth to The Long Goodbye in 1973. In typical Altman style, with an acute awareness of genre and a mischievous will to invert generic expectations, The Long Goodbye presents itself as a neo-noir with a difference.

Unlike its contemporary neo-noirs, such as Bullitt (1968) and Dirty Harry (1971), which took themselves very seriously, Altman plays with genre, with the legacy of noir, and with the expectations of hard-boiled stereotypes. As a result, The Long Goodbye received a less-than-lukewarm critical reception upon its release, and has only over time come to receive a cult status.

Its resurgence has been marked by this exclusive Blu-Ray re-release of the film by Arrow Films.

The insightful extras, including interviews with starring actor Elliott Gould and cinematographer Vilmos Zsigmond, provide an extensive backdrop upon which The Long Goodbye’s characteristic style is evaluated as having come to define an era of neo-noir, and paved the way for future film.

In an interview with Vilmos Zsigmond, the cinematographer explains the innovative experimental flash technique which he developed alongside Altman – a technique which gives the film its characteristically grainy and consequently over-exposed quality. Zsigmond marks this as a new style, which gave the palette of the film a more natural appeal, further remarking that he believes modern film will return to this look in the future.

The film’s subsequent restoration for Blu-Ray reinforces this very technique. The shadows so traditional to the genre are contrasted against the over-exposed quality of Zsigmond’s cinematography to great effect.

Zsigmond also points to the zoom lens as an innovative technique which set Altman’s films apart from its contemporaries. ‘Altman loved the zoom lens – he really invented to zoom lens’, he says, further suggesting that no director before him had used the effect to the same extent.

Aesthetically, the film both conforms to and creates a new path for noir – using and developing the shadowy palette that came to define the genre.

The characterisation also functions on many layers, distorting and inverting conventional noir. Marlowe himself demonstrates a certain awareness of genre by refusing to conform to the standards of hard-boiled fiction, calling out the stereotypical script that he is expected to follow when the cops enter his apartment before defying it: ‘Is this where I’m supposed to say, “What’s this all about?”, and he says, “Shut up! I ask the questions”?’.

Elliott Gould, in his interview, describes The Long Goodbye as ‘a film about human nature’ in its purest sense. Marlowe is initially cast as the nice guy, ‘the nicest neighbour’ on the block, the one who goes out at 3am to buy cat food for his miserable pet. He is a private detective with a rare moral compass, refusing to get involved in divorce work, and refusing to believe that his friend Terry would kill his own wife. He is unlike the elusive and violent-for-violence’s-sake detectives Frank Bullitt and Harry Callahan. But for all his moral standards, Marlowe cannot sustain his integrity when he is thrust into the fabric of real crime.

The film is dominated by this duplicity. Where do morality and immorality, realism and parody, good and evil, direction and disorientation meet? Even the novel’s 1950s character creates a tension with the film’s contemporary 1970s California social backdrop. The film is dictated by tensions, and every time Marlowe believes one to have been resolved, he is thrust into another. Murder, missing persons, and misplaced money all dictate the means by which Marlowe’s moral compass is tested. 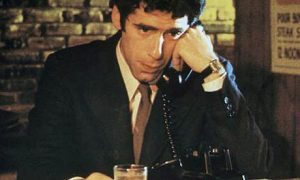 The Long Goodbye is a rare example of a pre-Lynchian take on real life, on what happens when morality and immorality are no longer so easily defined, when genre becomes lucid, when a single well-meaning man becomes tangled in a web of immorality which he can no longer resist, spun by a series of accidents, coincidences, and, ultimately, his own actions.

Altman’s ultimate violation of the genre is rejecting – both cinematographically and generically – the ‘black and white’ nature of film noir. The unexpected becomes reality in the end, when Marlowe, in a shock act of an-eye-for-an-eye revenge, turns the pistol on Terry. Altman ultimately places his characters in a world where they perform, they lie, and they struggle; a world in which nothing is as it seems; a world in which heroes are fallible and villains are human.