Robert Rodriguez’s career has got ”action comedy” written all over it. Desperado (1995) was a memorable and promising breakthrough for him, which he even surpassed, in this reviewer’s opinion, with the sequel, Once Upon a Time in Mexico (2003), and also with the noir comic book adaptation Sin City (2005). My favorite of all his work, however, remains Machete (2010). That was a raw, irreverent and very political action comedy that contained the kind of shock value that the overrated Quentin Tarantino only dreams of. You know,  the clever kind.

The sequel, Machete Kills, is now coming to DVD and Blu-ray, and following the original is a tough act. So, does the new one disappoint? Well, yes and no. Mostly no. It disappoints in the sense that it is not significantly political (apart from the usual clichés about some nefarious government types), but it does deliver exactly what any fan of extreme and funny action thrills could possibly want – so in that sense it is definitely no disappointment. 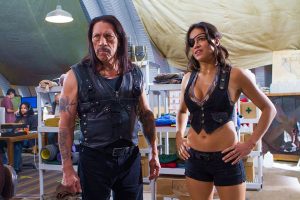 As a newly minted U.S. citizen, Machete is called in by the presidential office to ”volunteer” for a mission to stop an evil arms merchant. In the course of dodging devious damsels and handing a bunch of karate clones their asses and other assorted body parts, our hero eventually catches up with the real bad guy: Luther Voz, a super-villain much like Drax in the Bond movie Moonraker (1979), complete with a plan to launch a bunch of ruthless rich people (like himself) into space! Voz is delightfully portrayed by Mel Gibson in a performance that is probably a satire on his own public image as a bit of a lunatic. And it is actually funny.

Let’s also give Danny Trejo his due. In fact, that is precisely what this franchise is giving him. Since his very Machete-like character was introduced as an ultimate bad-ass in Desperado (not that he hadn’t been a grade A bad-ass in a number of earlier movies, of course), this is the kind of role he was born for. And who but Danny Trejo can pull off making a splash as an action hero in his late friggin’ sixties?! That’s what you gotta call rugged! 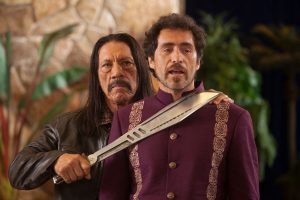 This movie gets a lot of flak from a number of other reviewers, but I wonder what they expected. Granted, Machete Kills is not as original and not as passionate as the first movie, but it basically delivers a lot of the same edgy action comedy, and it is neither excessively vulgar nor tacky – the most descriptive word that comes to mind for me is ”cool”. Yes, it is extremely silly, with limbs flying everywhere, but it gets the tone right. And that’s the important thing. It is intentionally over the top and relishes in its own silliness. It is also replete with references to other movies. What’s not to like?

Machete started as nothing but a trailer, and now the franchise has two full movies. It is apparent from the end of Machete Kills that they are planning a third movie: Machete Kills Again… In Space, to complete the trifecta – and as a sci-fi fan, and a fan of both of the two movies, naturally I would love to see it. Whether this sequel is successful enough to warrant the actual production of the threequel, however, is still, as far as I know, up in the air. I say bring it on. I’m crossing fingers!

Machete Kills is out on DVD and Blu-ray in the UK on February 17. 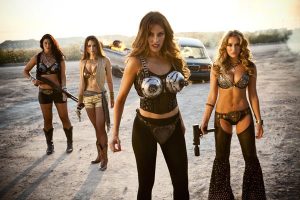