Appraising this contemporary film adaptation of Henry James’ classic 1897 novel, What Maisie Knew, puts me in a bit of a quandary. On the one hand I know that it is made to be its own movie, with its own point, set in the early 21st century. On the other hand it is very difficult not to judge it according to the brilliant literary and artistic merit of the original late 19th century novel, compared with which this adaptation falls catastrophically short.

The novel is about the growth of a young girl, Maisie, whose parents are irresponsible twits. The parents separate and each finds a new lover, but this also goes awry, and these two lovers – Maisie’s step dad and step mom – end up together. Maisie then has to choose whether she wants to live with them, or whether she wants to live with her governess, Mrs. Wix, who has reliably raised and educated her. Maisie chooses Mrs. Wix, because knowledge and education provide a better and more stable life than that of a bourgeois nuclear family which surely won’t last long anyway.

In this movie adaptation, Mrs. Wix, who in the novel is cheerful and loveable and ends up being Maisie’s ultimate role model, is almost entirely excised from the story; she makes an appearance only briefly as a virtually mummified old crone who keeps nodding off. Well! So much for these film-makers’ understanding of the importance of knowledge and education. And, unlike in the novel, Maisie ends up being happy in the normal nuclear family environment provided by her step parents. These things are effectively anathema to James’ intention with the story. The artistic and thematic content of the original novel seems to have been surgically removed – one can almost see the missile striking and destroying it – in favor of the kind of ending that the original Maisie decided against. It is so absurd that it is funny – the thinking behind this movie is precisely the reason that Henry James couldn’t stand America and opted to live in England instead. This is like the MTV version of his novel. Had he seen it, there would have been much facepalming and gnashing of teeth.

But, you know, as completely bourgeois as this movie is, one can certainly opt to evaluate it on its own terms, independently of the novel. Although its soundtrack pervasively consists of the kind of low-key, down-beat, dull, sad, piano-laden and pretentiously artsy music (can you tell that I find it annoying?) that characterizes so many low-budget movies by inexperienced directors, most other technical aspects of the movie are perfectly admirable. There is nothing at all to criticize any of the competent actors for, and by the time the story really gets going, about an hour into it, it also becomes genuinely touching. Onata Aprile as Maisie exudes all the responsibility that her parents lack, and she has enough patience and wisdom to endure the endless shuttling between her four parental figures.

By the end we have to ask: What was it Maisie knew? In the original novel she knew that she should not choose the emotional chaos of either her biological parents or her step parents; she should instead choose the dependable rationality of knowledge and education; essentially of science. In this movie, however, which takes place only while Maisie is little (in the book she grows into a teenager), the latter choice is not available, so she can only choose between her biological parents and her step parents, and what she knows here, then, is that she should not choose to be with her irresponsible biological parents. 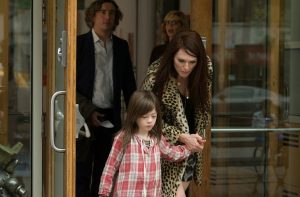 The point of the movie, then, is not that of the novel, namely to show the growth of a female protagonist in a tale imbued with considerable social commentary and allegory. Rather, the movie turns the story into the very literal story of a child caught in a problematic domestic situation and having to cope with that. By dispensing with the artistic substance of the novel and interpreting the story in a direct and literal way, we get a very different story which has to stand alone on its own merits, and so it does. As simply a movie about a child in dire straits, it is impressively unusual and generally well-made. One simply wonders why they decided to base it so loosely and superficially on a great novel of classic literature. 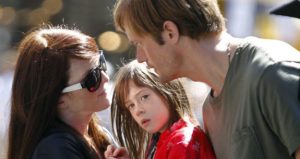 What Maisie Knew is released on DVD and Blu-ray in the UK on January 6. This review is based on a DVD screener. Extras include directors’ commentary, deleted scenes and a trailer. On my screener disc, the extras menu, once chosen, cannot extricate itself from itself; some glitch prevents you from returning to the main menu. Once you are in the extras menu, you can only access other functions by pushing the disc out of the player and reinserting it.