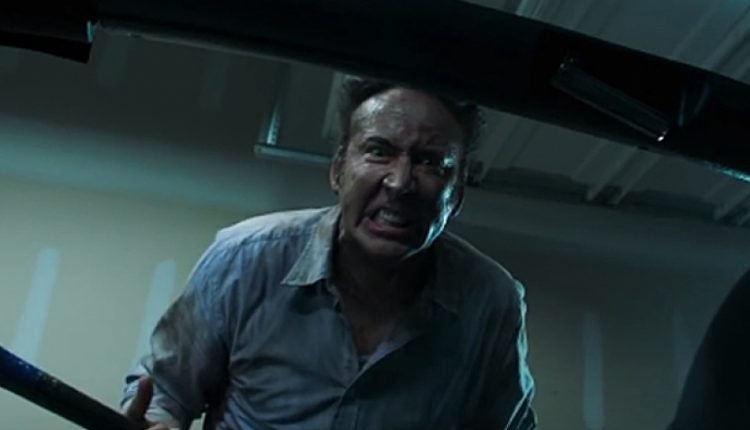 Once upon a time, I would have tried to convince you that Nicolas Cage was one of my favourite actors. His Action Trilogy of Face/Off, The Rock and Con-Air all hovered somewhere between great film and ‘guilty pleasure’, he starred in cult faves such as David Lynch’s Wild at Heart and Raising Arizona, and had an emotional Oscar-winning turn in Leaving Las Vegas. Since then though, Nicolas Cage is more famous for being a meme: a go-to gif that represents anything from being bat-shit crazy to doing dog-shit remakes and anything trippy inbetween.The question is, will Mom and Dad go anyway to change all of that?

Mom and Dad applies an interesting twist to the done-to-death zombie sub-genre, where instead of contracting Rage, falling foul of an evil encyclopedia or morphing into a metaphor for consumerism, parents begin to act like wild animals by savaging their young. Come on, we’ve all been there, haven’t we?

The familial relationships are well-formed if not a little cliched, but the resulting argy-bargy, especially between mother and daughter, is cruelly convincing. So much so that savaging the kids seems like a pretty good idea to begin with. It’s well foreshadowed too. Cage shows restraint, yes, I said Cage shows restraint, when he catches his kid throwing a ball in the house and takes a second to calm instead of kicking off. But it’s just a sign of what’s to come. 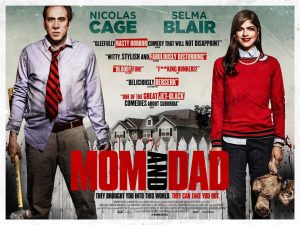 One of Mom and Dad’s strengths is where it moves away from the immediate family and focuses on how other parents are getting to grips with garotting their children. The parents waiting outside school a full hour early is a strikingly unnerving image, as is the horde chasing their kids across the football field, felling them as they go. The tone is jarringly inconsistent through and a birthing scene soon turns unimaginably ugly, before thankfully being forgotten about with the tone lightening up again.

Some frantic editing makes certain scenes unwatchable too, with any 18-related content seemingly chopped. The majority of the bloodspill happens off-screen or in between cuts which leaves the viewer a little unsated and disconnected from the events and characters onscreen.

When it all finally goes south for the Ryan family themselves, Mom and Dad falls somewhere between Home Alone and Don’t Breathe, as Cage and Blair team up to try and off their offspring. They’re a joy to watch at this point and there is some genuine sympathy created for the little kids at their mercy. But just when business is picking up…director Brian Taylor throws us into a ‘3 weeks ago’ flashback with Cage going HAM with a hammer on a pool table. Mom and Dad then takes a breath as it tries to explore deeper meaning through character monologues from both Brents, but sadly, this just jars instead of juxtaposes.

What holds Mom and Dad together though, is the performances. Winters and Arthur do admirable work as the tormented kids, whilst home room teacher Joseph D. Reitman owns every single second of his screen time. We also get a surprising cameo from a cult favourite which would have been all the more exciting if the trailer could have held its nerve. As for the leads? Can we have more Selma Blair please? And Cage? Somehow he’s still not as wired as he was in say, The Rock or even The Wicker Man but he’s infinitely entertaining and always endearing.

Not quite the black comedy classic it could have been, Mom and Dad probably mirrors your own parents: often frustrating, normally annoying but also with moments of brilliance.