The home release of Darren Aronofsky’s seventh feature film is a more highly-anticipated event than its initial arrival in the cinema. mother! has been deemed a deeply divisive movie: a masterpiece to some whilst much-maligned by others; the film that broke the “they were actually a thing?!” couple of Aronofsky and leading actor Jennifer Lawrence and, ridiculously, also earned Lawrence a ‘Razzie’ (which shouldn’t actually be a thing). What’s that line about ‘bad publicity’ again?

For the record, mother! documents a young woman (Lawrence) in the process of restoring her husband’s house (which was razed to the ground in a fire) while he himself (Bardem) struggles with writer’s block. All seems nearly normal until a ‘super-fan’ in the shape of Ed Harris rocks up and becomes a permanent resident. If the idea of having guests wasn’t horrifying enough, the house itself begins to bleed and Lawrence discovers she can feel its pulse and heart palpitations. And then it gets weird. 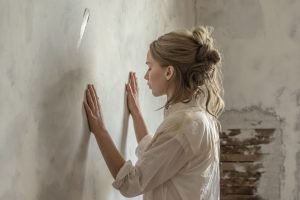 Contrary to introduction above, the cast’s performance does takes a back seat to the suspense. That’s not to say that Lawrence, Bardem et al let the film down, but much like Shelley Duvall in The Shining, there’s arguably more reacting than acting. Michelle Pfeiffer is the exception to this rule though, and in her portrayal of the wife of Ed Harris’ character, she’s a revelation: adorable, yet deplorable.

Excuse the personification, but the house itself is the star of the show. It chases and confuses the characters whilst chewing it’s own scenery: a display of cannibalism completely in keeping with the movie’s macabre musings. Excuse the alliteration too. The house is fastidious in its construction: itself a living, breathing organism, again reminiscent of The Shining’s OverLook Hotel. The house design ensures there are no dead ends and nowhere to hide and by the end of the film, you know your way around it just as well as J-Law does.

And perhaps that’s mother!‘s fatal flaw: it’s all about the house and the unfurling mysteries within. The characters are merely props. At no point do you feel any sympathy for the protagonist: in fact, the entire cast lacks any redeemable or relatable qualities. Social commentary? Pregnant with meaning? Substandard characterisation? Possibly. Trouble is, it makes the viewer into being nothing more than a spectator, rather than a participant.  Perhaps that’s for the best. If it was down to this writer, the houseguests would have been sent off with a flea in their ear and Bardem would be off to the job centre. Roll credits. 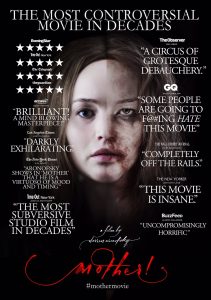 That aside, much has been made of the film’s final third, the business end, which is make or break for most (so much so it contributed to a revised marketing campaign). Gruesome but hardly gratuitous, high falutin yet highly engaging, shocking enough to disconcert any Daronofsky aficionado, mother! pulls off the neatest of tricks; it coerces you to skip back to the start once the credits begin to roll, eager to rewatch with a new realigned perspective. (This would be a mistake, btw, as the character names may clear up/further confuse any understanding). Just like in the Christmas holidays, mother! stays with you long afterwards.

Faults aside, mother! is controversial, subjective and richly textured: isn’t that what film-making should be about? That this is a mainstream movie is a reason to rejoice! We’ll leave the theories until you’re ready to discuss them. When you are, pull up a pew. Let’s get biblical.

mother! is out now on Digital, BluRay and DVD.