Muirhouse is another in the never-ending line of found-footage horror movies released in recent years, but don’t let that put you off. It’s really a very good horror movie, with loads of atmosphere, some good jumps and a very professional and polished presentation of the material.

Iain P. F. McDonald plays writer Philip Muirhouse, a man who is currently working on a DVD to accompany his latest book about haunted locations. The last location to visit is the notorious Monte Cristo house, a place known for having a number of very active spirits. There’s supposed to be a whole team in the house, as usual, but they’re delayed in their journey to the house, which leaves Muirhouse setting up the cameras and doing some of his scripted pieces all on his ownsome. But he soon gets the feeling that he’s not really alone.

While it’s a very lean film – the runtime in the press release I received is 80 minutes, the runtime on IMDb is 75 minutes, and the real runtime is even a minute or two shorter, although there’s audio over the end credits and one final post-credits scene to enjoy – this ends up being a big plus, thanks to the perfect pacing and the restraint shown by writer-director Tanzeal Rahim.

The first half is almost all information, but it also starts to thickly spoon on the atmosphere as soon as the Monte Cristo house is shown, and tales are told about what has been seen there. Rahim has, for the most part, kept things grounded in reality, and he admirably decides to avoid the more obvious trappings that a movie such as this could fall into. Think of Grave Encounters without the more fantastical elements and you have a good idea of what this movie aims to be.

McDonald is just fine in the lead role, a role that sees him being the only person onscreen for over half of the movie, but the main character is the house itself. A lot of the marketing has been focused on the fact that the Monte Cristo house is a real haunted location, and that Rahim decided to film there. Before watching the movie I rolled my eyes and wondered just why anyone thought that would add to the movie in any way, but I have to admit that the place has an eerie vibe to it. Yes, that vibe may well stem from the stories told about the place, but those stories have been told by people who believe what they have seen or heard there, and it’s hard not to “look around” the building without feeling the hairs on the back of your neck tingle.

It’s a slow burn, no doubt about that, and there are a few too many scenes that rely on low lighting and jittery, hand-held camerawork, but this ends up turning into an excellent horror movie that manages to avoid seeming ridiculous while also providing fans with one or two genuinely freaky frights.

Muirhouse is released in the UK on 10th February. The disc also includes an informative commentary from Rahim, a commentary from the lead actor, a featurette about the Monte Cristo Homestead, and some trailers. Even if you’re tired of found footage films at this point, I still recommend giving it a go. 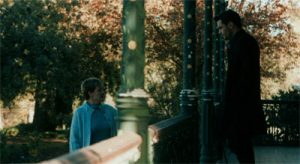