If you remember the 1960s, then you weren’t there. That’s how the saying goes.  Luckily for us, in My Generation, Michael Cain tells us he only ever smoked the devil’s lettuce once, and it made him laugh so hard that he couldn’t get a taxi home, so he vowed never to inhaled again.

As a result he’s got a better recollection than most of what went down in the swinging 60s and as such, makes the perfect host for this retro-spective documentary on the music, art, fashion, drugs and politics of the time. Compiled with retouched film, original imagery and first-hand accounts, the doc revisits the decade with fondness and a sense of pride over all that was achieved. Which is were it becomes problematic.The repercussions of excessive drug use and free love more or less starts and ends with the death of Stones’ guitarist Brian Jones. For a documentary that champions the working man, it’s celebrity-centric sympathies are difficult to digest.

There’s a particular poignancy to the discussions here: how the 60s youth refused to be ruled by the 1%, how Pirate Radio saw music for the masses without any money going to The Man, and how British students rebelled against having their career trajectory mapped out from an early age. Watching in 2018, it’s disappointing to think that for everything the 60s seemed to change, by the same token it seemed to change nothing at all. 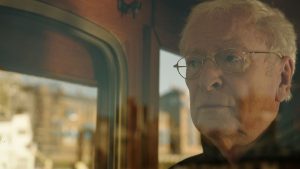 That aside, does this film teach us anything new about the 60s? Right on! My Generation is loaded with  fascinating anecdotes: how seminal rock band The Who scrounged the wood to build their first guitars themselves; how photographer David Bailey travelled crossed the Atlantic to escort models to his studio and how Marianne Faithful flashed the police to avoid arrest.

The soundtrack, as you’d expect, is nothing short of sublime, not only featuring the cliched songs from every Now…60s compilation but with some juicy little gems thrown in there too. The Rolling Stone’s version of McCartney/Lennon’s I Wanna Be Your Man is suitably shambolic and Thunderclap Newman’s Something in the Air makes you nostalgic for something you’ve never had.

Finally, it’s Caine himself who comes out on top. For anyone who’s ever criticised the former Maurice Micklewhite as being a one-trick pony (my hands are up), his admirable ambition to bring working class, regional accents to Hollywood frames his omnipresent Cock-er-ney drawl in a different light. And he also gets the “you’re only supposed to blow the bloody doors off” line in nice and early.

“Youth is not a time of life, it’s a state of mind,” says Caine, closing the documentary. A well-meaning and idealistic platitude, and a appropriate summary of My Generation.