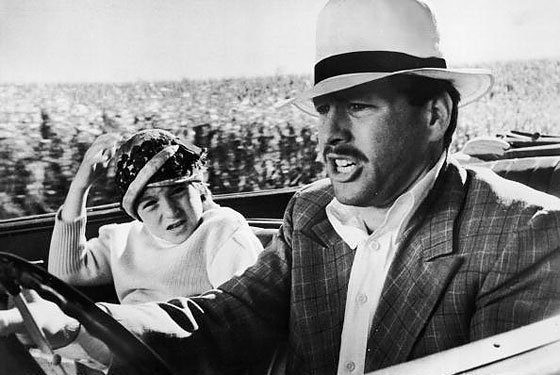 Like The Last Picture Show, his monochrome tapestry detailing the economic and emotional stagnation of a post-war Texan community, Peter Bogdanovich’s Paper Moon aestheticised the impoverished through the prosperous channels of New Hollywood, the last artistic peak of a capitalist dream whose first flush of auteurs – Welles, Ford and Hawks especially – provided his key models of inspiration (Ford’s Steamboat Round The Bend, advertised on the marquee of a local movie house, is the most quoted predecessor).

Bogdanovich has never been a nostalgist, however, even if Paper Moon’s gentle heart and rosy innuendo play in stark contrast to the hyper-violent and sexualised works of New Hollywood peers Scorsese, Penn and Friedkin; and it’s probably not an accident that this film could have passed under the recently abolished Production Code. Instead, Bogdanovich’s evocation of the Depression-era Midwest, shot by DP László Kovács on the flatlands of Kansas, feels authentic to the period because of his careful appropriation of a visual grammar which defined the films of that period. If the characters of Paper Moon could step out of the frame and see their world in black and white, the picture would be similar to that which they’d find in the movie house showing Steamboat Round The Bend.

The tale, adapted from Joe David Brown’s 1971 novel ‘Addie Pray’, follows a dustbowl opportunist named Moses (Ryan O’Neal) as he transports a stern-faced orphan (Addie, played by Tatum O’Neal) to relatives in Missouri. It’s  a stroke of neat luck that the child – who could well be his own – is an even sharper swindler than Moses, and his “Kansas Bible Company”, already a mildly profitable racket in the ’30s, suddenly takes on a new lease of life under Addie. Their journey becomes a cross-country zig-zag taking in prostitutes, bootleggers and cops, and in the end the pair must decide whether to part ways or continue their felicitous operation.

Bogdanovich has made some great films since (his 2001 murder mystery The Cat’s Meow is severely underrated), but none with the heart of Paper Moon, which glides by on the chemistry of its father-daughter leads. As Addie gradually humbles Moses, the affection he develops for her – however begrudgingly – thaws her preternatural cynicism, and the pair come to a mutually beneficial crossroads involving only the requisite amount of emotion. The film’s heart lies as much in the evocation of the landscape they drift through, and the loveable losers and schemers who decorate their path – especially an ‘exotic dancer’ named Trixie Delight (the hilarious Madeline Kahn), who hops onto any wagon passing through town.

If Addie and Moses’ bond remains financially motivated for the duration, as she insists upon pulling scams until he can pay her back $200 in stolen compensation, they eventually come to love each other for that very ability to provide – their cons and manipulations put food on the table and gas in the tank, and in this destitute landscape the only thief Addie and Moses can trust is the one whose barely-lined pockets they share. Even if it means doing bad, their road to home is paved with good intentions…

As with all Masters Of Cinema releases, this Blu-Ray set is produced with care and detail, with a gorgeous 1080p digital transfer of the film accompanied by a dry Bogdanovich commentary, several short documentaries, and a booklet featuring a new essay by Michael Brooke. An essential release, and hopefully its success will lead to a full release for Bogdanovich’s third and best feature, What’s Up, Doc?.